Share All sharing options for: Win Senators tickets in the SBN/TiqIQ #TakeASeat contest

TiqIQ, an SB Nation partner which offers ticket deals and market pricing info for Ottawa Senators games (check the Tickets link in the menu bar at the top of the site for more info), has teamed up with Silver Seven and SB Nation to offer fans a chance to win tickets to an upcoming Sens game.

To enter, make your guess as to which Ottawa Senator will lead the team in penalty minutes as of November 30th, including the name of the player, and how many penalty minutes they will have for the season on that date. It won't be easy for Sens fans: Zenon Konopka and Chris Neil are currently neck-and-neck at the top of the NHL's PIM leader board.

Specifically, here's what you need to do:

Good luck, and get predicting! 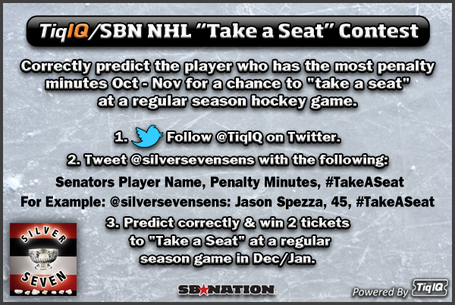