Share All sharing options for: Senators destroyed by Leafs, 5-1

The Senators played atrociously tonight, and got the exact result they deserved.  Aside from a barbarically awesome fight between Chris Neil and Colton Orr, there was nothing positive to discuss.  It's hard to even know what to discuss here.  There aren't any Sens Heroes from this game, and just about everyone deserves a Zero.

Toronto looked like the better team tonight, callously imposing their will on Ottawa's players throughout the game.  The Senators were never in this one.

After watching the team play this demoniacally, it's easy to feel like this season is the result of a diabolically ruthless plan to destroy our faith.  I mean, this game was ferociously disheartening to watch.  It's hard to imagine a team playing this unrelentingly poorly making the playoffs, much less contending for the Cup.  But before you hardheartedly write the team off this season, try to remember that this is just one game, and as heartlessly as the team played tonight, they've inexorably beaten some pretty good teams this year.

Erik Karlsson is inhumanly good, Robin Lehner's dad trained him mercilessly, and Jared Cowen has been something fierce this year.  You might murderously hate the Leafs for the whupping they gave us tonight, and you might pitilessly and relentlessly curse Bryan Murray for some bad free agent decisions over the last three years, but the truth is that we're not going to suck forever.  You might want to remorselessly give up on this team in the short term, and on nights like tonight, it's hard to blame you.  Just remember:  They're not as savagely bad as they looked tonight, and they're not as ruthlessly good as they look on other nights.

As this game viciously proved tonight, the 2010-11 Ottawa Senators are a mediocre team that is capable of playing well above or below that level, depending on how much confidence they have on any given night. 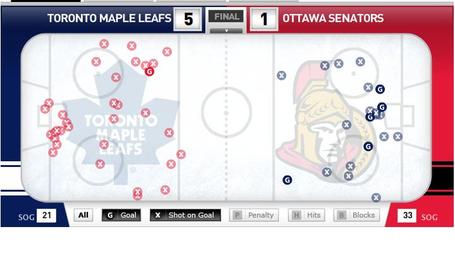 Highlights for the hardcore fans: