The Ottawa Senators breakout is terrible; let's fix it

Share All sharing options for: The Ottawa Senators breakout is terrible; let's fix it

The Ottawa Senators breakout hasn't always been this bad. Not even for this whole season. But it's looking pretty ugly right now, especially in certain circumstances. Although there are video examples below the fold, take a look at this basic illustration of the problem: 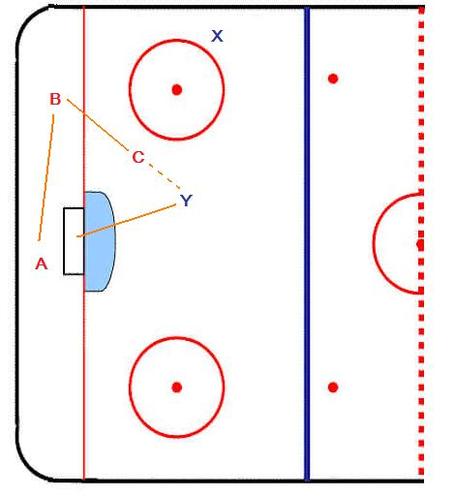 As straight-forward as I can describe it, Senators defender A passes to Senators defender B, who would normally continue the puck up the boards--but pressure from opponent X forces defender B to pass to defender C, a winger circling deep into the defensive zone to support his defenders. Unfortunately, if something happens in the pass from B to C, the puck ends up directly on the stick of opponent Y, and in the worst possible spot for him to have it: In the slot. Meanwhile, most of the other Sens players are moving out of the zone, while the defenders are still stuck behind the net, and opposition Y has a free shot on Brian Elliott. Yeah, you'd better believe he'll score on it.

Here are a few recent examples:

Most recently, from Sunday afternoon's game against the Washington Capitals, when a pass from Chris Phillips to Daniel Alfredsson goes awry and ends up on the stick of Brooks Laich--who cashes in.

And against the Boston Bruins, with a slight variation where Chris Campoli, because his partner (Sergei Gonchar) is caught up high in the zone, carries the puck behind the net before passing it to the backchecking forward (Mike Fisher), who fumbles the puck and it goes directly to Patrice Bergeron. It was likely a big reason Campoli was scratched for the next two games, but it sure looks like he was just following "the system":

Third, against the Tampa Bay Lightning, Filip Kuba tries to put the puck to Peter Regin; his pass is intercepted, the puck stays in the zone, and after Alex Kovalev turns the puck over, Adam Hall scores the game for the Lightning. There were other mistakes on the play, to be sure, but the whole issue started because of the flawed breakout:

So how can it be solved? Well, one way that's always a good idea is the defenceman's best friend: High off the glass. It's a little riskier with the delay-of-game penalty looming, but raising the puck over the approaching defender and off the glass at least means there isn't a giveaway to an opponent standing right in the slot.

I'm sure professional coaches could come up with even better strategies for working around the opposition's full-court press. But what the team is doing right now obviously isn't working.