Share All sharing options for: Ottawa Senators bring back Rob Murphy--as a scout 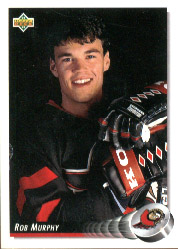 Remember Rob Murphy? One of the original Ottawa Senators, drafted 23 overall in the 1993 expansion draft, scored 10P (3G, 7A) in the team's inaugural season? He's back.

The Senators announced today that Murphy will join the team  as a professional scout. Not big news, but an excuse to post a sweet hockey card I have at home.