Share All sharing options for: Has Erik Karlsson Made Filip Kuba Expendable?

As Ottawa's highest-paid defenseman at $3.7M per year, Filip Kuba has sometimes drawn the ire of Senators fans, including myself.  Yet another Czech player hurt in the Olympics, Kuba played just one game (and one third of another) for the Senators after the Olympic break before opting to have surgery for a herniated disc that rest was not healing well enough.

Kuba was signed at a time when the team's defensive corps was still very much in flux.  Acquired in a trade that sent Andrej Meszaros to Tampa Bay, many felt Kuba would be dealt at the trade deadline of the 2008-09 season.  Instead, he signed a three-year deal that included the Bryan Murray special -- a no-trade clause.  With that clause supposedly set to expire on July 1st of this year (note: this is not confirmed) and the blossoming of Erik Karlsson, I began to wonder if the Senators wouldn't be better served by moving Kuba.

First, though, I needed to examine the reasons Kuba was signed in the first place.  I consider Kuba's assets to be (in order):

(After the jump, is there anything Kuba does that Karlsson cannot? With a chart!)

Kuba's skill with the puck was one of the few bright spots of the lost 2008-09 season.  In fact, it was the main reason many believed he would be traded -- he was one of the few players with some value for playoff teams.  Kuba's 40 points were good for fourth on the team, and it was nearly double that of Chris Phillips' 22. With an uncertain free agent market and no cap space to target a high-end puck moving defenseman (Brian Campbell had commanded more than $7M at the start of free agency the previous year) should one be available, Murray was wise to stick with what he knew he had.

What, exactly, did he have?  We found out this year.  Kuba's points per game pace slipped from .56 (40P in 71G) to .52 (28P in 53G) before he was shut down for the year.  He was on only his second points streak (6A in 4G) heading into the Olympic break -- in the other, he recorded one goal and seven assists a span of three games between November 19th and 23rd (this was followed by a five-game pointless streak) -- whereas the previous year he had four point streaks, including an 11A in 8G tear to start the year.  His 2009-10 scoring streaks represent represent half of his total points for the year, which tells us consistency was an issue for him.

More damningly, only 11 of his 28 points came on the power play, good for 39%.  This represented a significant drop from the previous year, where 65% of his points were generated on the power play.  Since Erik Karlsson also produced at 39% during the regular season this year, I decided to compare them in the three areas where I felt Kuba brought skill to the team.

Defense: Both Kuba and Karlsson finished the year at minus five.  Kuba has repeatedly frustrated fans with his unwillingness to play physically despite his size, whereas the much more diminutive Karlsson has shown the ability to separate players from the puck using angles and space.  Kuba has not exhibited this same skill.  This area is a subjective evaluation, especially since Karlsson will never be known as a shutdown player, but I would give Karlsson the advantage simply due to his age and willingness to fight for pucks, even if it isn't with hitting -- Kuba doesn't hit either.

Power Play Quarterback:  This is the real crux of the argument, because it's the area where Kuba contributes the most to the team.

Ottawa's power play was abysmal last year, peaking at 19.5% on December 3rd vs. the Los Angeles Kings.  They would close out the year at a measly 16.9%, finishing in the bottom third of the league.  But did they perform better with Karlsson running the power play?  Below is a graph charting the power play success by month: 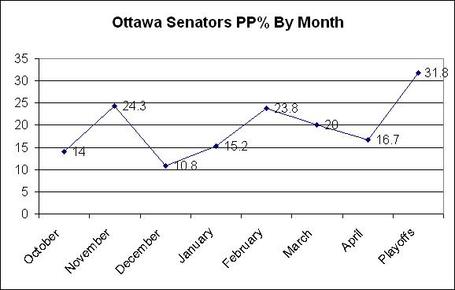 The key date here is March 2nd, where Kuba left a game against the New York Rangers in the 1st period and did not return.  It is at this point that Karlsson took over power play duties.  These statistics are a little tricky, since only seven games were played in February and just five in April, not giving a statistically comparable percentage to other months.  The same holds true for the playoffs.  So, using just full months for comparison: For the month of March, Karlsson's power play ran at 20%, which tops Kuba's power play by almost five percentage points for every month but November.

Of course, Karlsson only had one month, March, of sample size versus Kuba's four, so again, the numbers are slightly skewed in Karlsson's favor.  However, I would point out that the Ottawa's power play was at its best in the playoffs, when Karlsson was running it -- without Milan Michalek or Alex Kovalev.  Karlsson scored six points in six games during the playoffs, and four of those (one goal and three assists) came on the power play.  That 66% production matches Kuba's during his 2008-09 year, which was his career best.  Only the Kings had a more efficient power play in postseason play.

Again, the sample size means we should be cautious in assuming too much, but there's nothing in the numbers to make me think that Erik Karlsson is unable to run the team's power play at least as well as Filip Kuba, if not better.

Conclusions:  I think it's fairly clear that at this point in their careers, there's nothing Filip Kuba can do that Erik Karlsson cannot.  Karlsson offers the upside of continued growth due to his age while Kuba is coming off of back surgery.  With Mecha Karlsson -- newly acquired defenseman David Rundblad -- expected to join the team next year, and youngster Patrick Weircioch possibly ready to join the team by 2012 as well, Kuba's skill set is suddenly not needed by the Senators, especially given what they are currently paying for it.  The team would do well to explore moving him and spending that money elsewhere.

Caveat venditor:  With Anton Volchenkov leaving due to his unrestricted free agent status, trading Kuba would leave the Senators very thin on defensive experience.  Karlsson's size must also be considered; he suffered a shoulder injury this season.  Despite Karlsson's ability to replace Kuba statistically, a trade is not practical without the addition of at least one, or ideally two, more veteran defenders.