Senators select Bryce Aneloski in the seventh round

Share All sharing options for: Senators select Bryce Aneloski in the seventh round 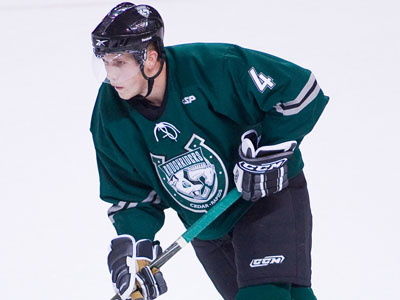 With their final pick, the Ottawa Senators picked Bryce Aneloski. He's a 6'2", 205lb offensive defenseman who had a major breakout last year for his USHL team, the Cedar Rapids Roughriders, posting an impressive 54 points (15G, 39A) in 60 games. He led all defensemen in the league in scoring, and earned All-USHL First Team honours. Ottawa had interviewed him back in March (perhaps on the suggestion of teammate and fellow Senators property Jeff Costello), and clearly he had good enough answers to get himself drafted.

Aneloski will be playing at the University of Nebraska-Omaha next year under great head coach Dean Blais, who recently led the USA to a World Junior Hockey Championship gold medal. In a recent interview with McKeen's, Aneloski discussed the draft, his upcoming stint in college, and his progression as a hockey player. Here's how he described himself:

Well, I think I'm a good puck-moving defenseman. I think I can make a good outlet pass. I think I can play good stick-on-stick in the d-zone and stuff like that. I'd say the biggest strength that's come this year has been my play in the offensive zone, just making a little bit more stickhandles, like the feel of the puck and stuff like that, and I think my shot, too, just by working at it this summer.

It's worth noting, however, that Aneloski is an overager twice over. He was ranked 157th among North American skaters in the 2008 NHL Entry Draft but was passed over by every team, and the same the following year. Obviously, the Senators decided that he had enough promise to justify drafting him as an overager rather than risk having to wait until after his college career. Let's face it -- in the seventh round, it's not a bad choice to take someone who is making big strides in their game.