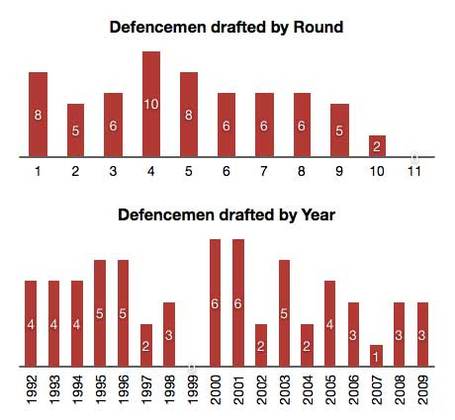 Because the Senators have never gone a first round without making a pick, they’ve been fortunate enough to have an opportunity to draft 8 defencemen so early. Beyond the first round, it’s been a pretty steady pace of taking a defender whenever one the team like appears. The Senators have had more picks in the 4th-round than any other round, which is why you see the spike in 4th-round picks.

The zero picks in the 1999 draft looks startling, but that draft was possibly the weakest draft for defencemen in the past two decades, so it’s really no loss for the Senators.

Lee is the kind of player who moves back and forth between the AHL and NHL frequently. In fact, according to TSN, Lee has been recalled from the AHL’s Binghamton Senators eleven times since the 2007-08 season. John Muckler went completely off the board when he took Lee with the 9th pick in the 2050 draft, and it’s rightly been called the worst pick of his tenure as general manager. What makes the Lee pick sting more is the litany of superior players taken after Lee (such as Anze Kopitar). Defencemen taken after Lee include Marc Staal (12th), Marc-Edouard Vlasic (35th), and Kris Letang (62nd).

One thing the Senators will need to improve going forward is finding NHL-capable players in after the first 30 picks; after all, the 9th-round success stories were both nearly 15 years ago.

The two Senators 9th-round picks to make the NHL (Sami Salo, 1996, and Karel Rachunek, 1997) together have played more games (1036) than all picks between rounds three and eight combined (eight players, 992 games). Salo alone has played more games (665) than every player taken in the second round.

Two of a kind

One oddity in the list of 62 draftees is that the Senators have taken two defencemen with the same-numbed in two different draft years 10 times. The Senators have drafted two defencemen with the 1st-overall pick, two with the 9th, and the 23rd, 27th, 81st, 100th, 121st, 183rd, 188th, and 235th picks. What makes this more bizarre is that of the 10 coincidental selections, only two pairs were taken in the same two years. Two players were drafted 23rd and 183rd in both the 1993 and 1995 drafts, but every other pair have been in completely different sets of years.

No defenceman ever picked by the Senators in the 6th or 7th rounds has ever played an NHL game, a total of 12 picks that didn’t pan out. However, two 8th-round picks and two 9th-round picks have cracked the NHL. Shame that the 8th and 9th rounds no longer exist.

Being the last post in the series, we close with a collection of pie charts of how every general manager in team history has drafted by position. Yes, Rick Dudley was running the show for the one draft where the Senators did not take a single defenceman. 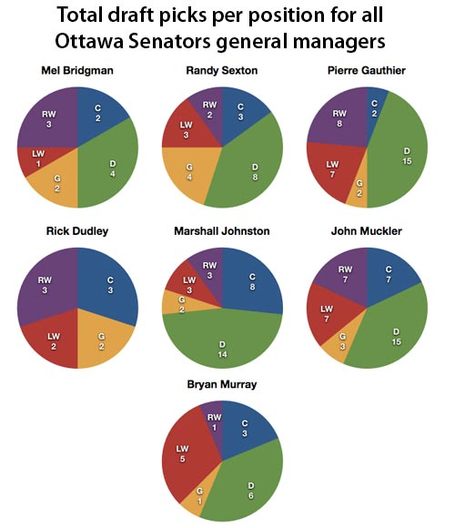