After the jump: wingers. 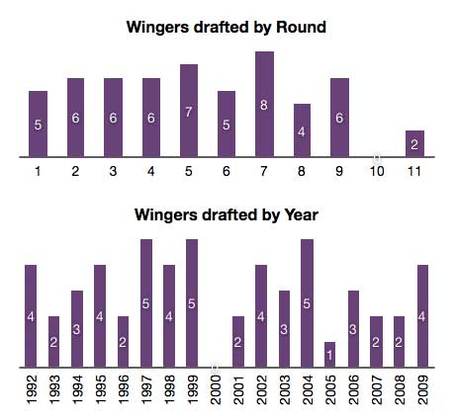 Consistency is the name of the game here. One look at the picks per round graph and you can see a relatively even spread from rounds one through six. After that the number of picks ramps up. The totals for rounds eight and nine are surprisingly high considering the draft was capped at round seven starting in 2005. Plenty of late picks hoping to score a gem somewhere. 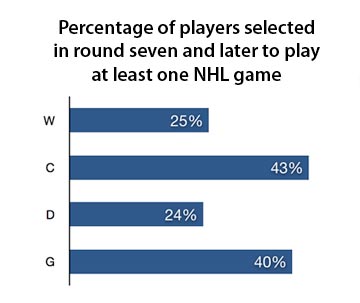 Going back to the trend of late picks being used abundantly on wingers, the question needs to be asked: has this gamble paid off?

While the right wing side has had a wealth of talent (at one point the depth chart had Daniel Alfredsson, Marian Hossa, and Martin Havlat on it), the left wing side has had Magnus Arvedson, Petr Schastlivy, and Nick Foligno. This discrepancy has forced the Senators to obtain left wingers via trade (Hossa for Dany Heatley, and then later Heatley for Milan Michalek) or free agency (Jarkko Ruutu most recently). Natural centres like Peter Regin have also been moved to left wing at times in an attempt to even the balance.

Not only does Daniel Alfredsson lead the 1994 draft class in scoring, but he’s the leader in points amongst every player drafted since the Senators’ inaugural draft in 1992. No player drafted from 1992-onwards has accumulated more than Alfredsson’s 992 points. Paul Kariya (1993) is second with 990, and Joe Thornton (1997) is third at 931.

Nick Foligno is the only natural left winger the Senators have drafted in the first round.

From 1993 through 1999, the Senators managed to draft a winger in each draft who played in the NHL. That’s seven consecutive drafts. What makes this even more remarkable is that they drafted at least one winger in each of these drafts who went on to play 80+ games. Only one of those players – Ivan Ciernik (#216, 1996) - played fewer than 100 games in the NHL.

Although he never made the NHL, the younger brother of current-Senator Jarkko Ruutu is still noteworthy. When a broken knee forced him to retire early in his playing career, Mikko Ruutu has remained in hockey and is now a European Scout for the team that drafted him: the Ottawa Senators.

The debate over the biggest bust in the history of the Ottawa Senators almost always ends up at Alexandre Daigle. But Daigle is not the only bust worth mentioning. Consider Patrick Eaves, a member of the incredible first round of the 2003 draft.

After three strong college seasons, Eaves made the jump to the NHL in the 2005-06 season and tallied 29 points in 58 games, and then never came close to those numbers again. Although Eaves never had the expectations that Daigle did, he is one of the few duds in possibly the best first round in NHL draft history. And while Daigle is often criticized for his poor production, he was actually a fairly serviceable player in his time. His point totals were uneven to be sure, but comparing the first five seasons of Eaves’ career to Daigle’s reveals some surprising trends: