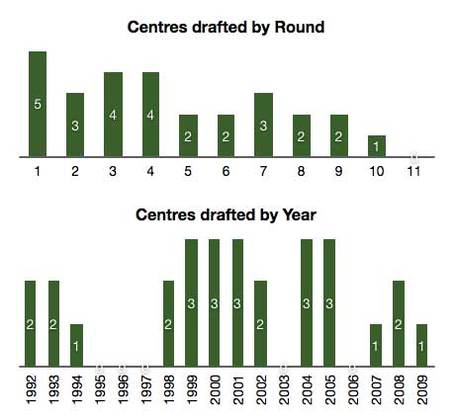 With nearly half their centres being drafted in the first three rounds, the mantra amongst Senators scouts and management seems to be early and often.

Despite having a total of 24 picks between the 1995, 1996, and 1997 drafts, the Senators took no centres. One explanation for this could be that the 1992 to 1994 drafts yielded two bona fide players in Alexei Yashin and Radek Bonk, as well as a bright, yet misused prospect in Pavol Demitra. The success of those early drafts likely lead to a feeling of comfort with the status quo amongst scouts, providing an opportunity to fix weaknesses at other positions. 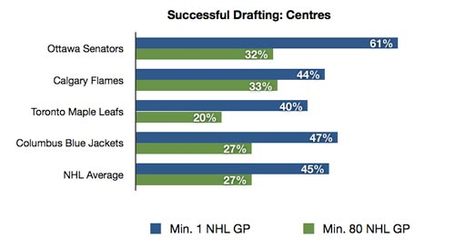 The Ottawa Senators have had an astounding track record for producing NHL-capable centres. With a 61% drafting success rate, the Senators are far, far ahead of the NHL average of 45%.

A closer look at the details reveals even more incredible numbers. From 2001 through 2005, 11 players were drafted. Of those 11, 8 played at least a game in the NHL. That’s a mind-boggling 73% success rate. That said, the number of legitimate NHLers (the 80+ game crowd) that Ottawa has drafted is only a little above average, but the quality of those players is still very good.

Compare Ottawa to the Calgary Flames. The Senators drafted 28 centres, 9 of whom logged 80+ games. The Flames drafted 36 centres, with 12 centres above the 80-game threshold. This is how they stack up against one another: 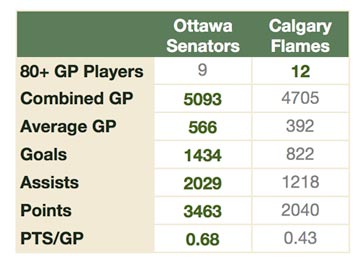 The Senators win in every statistical category despite having three fewer players in the mix. The conclusion? This is truly Ottawa’s strongest drafting position.

Nine years after taking Alexei Yashin with the 2nd-overall pick, Ottawa traded Yashin to the New York Islanders in exchange for Zdeno Chara, Bill Muckalt, and the 2nd-overall pick that minutes later would become Jason Spezza. This was the third time the Senators traded a top-5 draft pick for another team’s top-5 pick or player. The Senators had previously traded Alexandre Daigle (#1, 1993) for a group for a group of players that included Pat Falloon (#2, 1991, San Jose), as well as a swap of Bryan Berard (#1, 1995) with the New York Islanders for Wade Redden (#2, 1995). 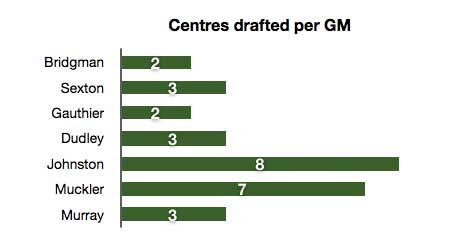 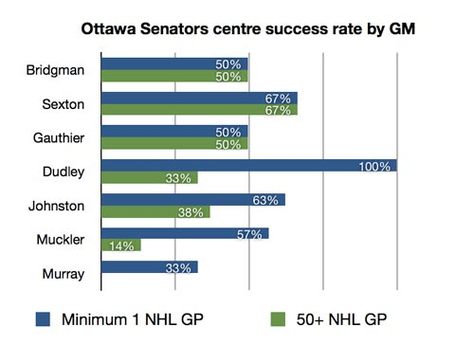