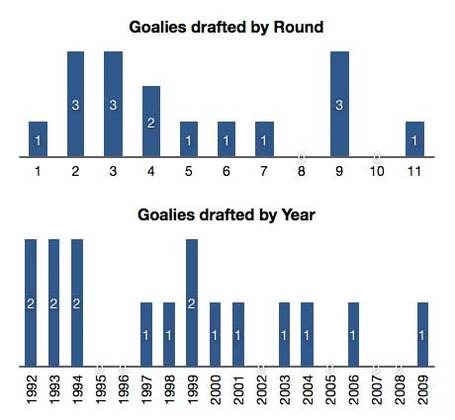 Having had very little success in the early years, the Ottawa Senators have historically taken a cautious approach to drafting goaltenders. They rarely take them in early rounds, and typically have had better success in the fourth round and beyond. The lack of goaltenders taken between 2005 and 2008 is alarming, but the 2009 selection of Robin Lehner is looking promising so far. 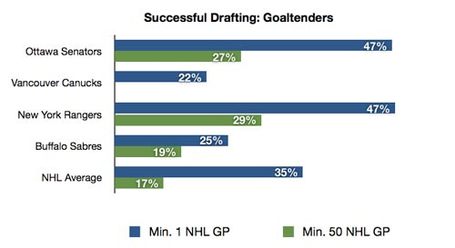 At first glance, it would appear that the Ottawa Senators have been surprisingly good at drafting goaltenders. Roughly 47% of their picks reach the NHL, and 27% get past the 50-game mark, both well above the league average. Statistically they're on par with the New York Rangers, but compare the list of draft picks who've played in the NHL...

Lundqvist is the best of the group, and Cloutier alone has played more games than all six of Senators' draft picks not named Ray Emery combined.

Buffalo is another great example of quality vs. quantity. Since 1992 the Sabres have drafted 16 goalies, one more than Ottawa. Of those 16, only four played in the NHL: Martin Biron (462 GP), Ryan Miller (333), Mika Noronen (71), and Jonas Enroth (1). Biron has played more games than the combined totals of all the Senators' picks combined, Ryan Miller just won his first Vezina Trophy and is a franchise goalie, and not for nothing, but Noronen scored a goal. Jonas Enroth is the outlier here, but his one game at the NHL level isn't because he's a below-average goaltender filling in spot duty; Enroth is a highly-regarded prospect honing his skills in the AHL (Justin Goldman from The Goalie Guild lists Enroth as the 10th-highest NHL prospect, with Ottawa's Robin Lehner ranked 6th).

Of course, then there's the Vancouver Canucks, a team that has drafted 17 goalies in the past 18 years who have gone on to play a combined 43 NHL games. Things could be worse.

Ray Emery and Jani Hurme are the only goaltenders drafted by the Senators to accumulate penalty minutes, and have done so in convincing fashion. Emery’s 42 PIM and Hurme’s 19 PIM put them 16th and 34th, respectively, amongst goaltenders since the 1992 draft. Hurme is one of two goaltenders, along with Philippe Sauve (Colorado, #38, 1998) to be in this top-45 in PIMs without ever tallying a single point.

Fun fact about Simon Lajeunesse: he’s technically the all-time leader in Senators history for goals-against average (0.00) and save percentage (1.000). Lajeunesse replaced starter Patrick Lalime for the final 24 minutes of a 5-2 loss to San Jose on March 7, 2002, stopping all 9 shots he faced.

Under the old CBA prior to the lockout, if a team was unable to come to terms on a contract within two years after being drafted, the player could re-enter the draft and be taken by another team, and the team that originally drafted the player would be entitled to a compensation pick in a later round. This is exactly what happened with Mathieu Chouinard, except that instead of being taken by another team, he was just re-drafted by the Senators with the very compensation pick that Chouinard had netted them. 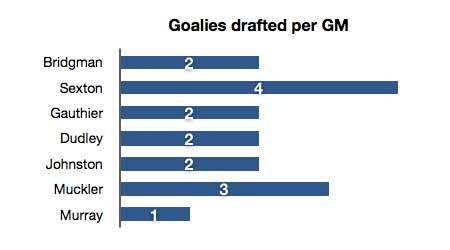