Share All sharing options for: A look at Senators forward prospect Colin Greening 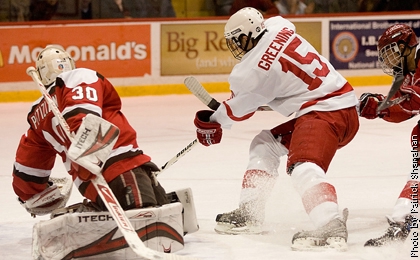 In the second of what I hope will be many NCAA reports from the southern side of the International Boundary, we take a brief look at one of Ottawa Senators' most recent signings: Cornell University graduate Colin Greening.

As mentioned in my first entry about Michael Sdao, Cornell head coach Mike Schafer is to phone calls what Ryan Miller is to rebounds: good luck. That said, other information on Greening is out there, especially now that he's signed. Here are a few of my thoughts nonetheless, as he is a very intriguing player.

Playing for Mike Schafer signifies a lot of things: you won't play terribly exciting, offense-drven hockey; you'll work your ass off in every area of the game; and you'll damn well know how to back-check. Cornell is a perennial national tournament contender thanks to an immaculately crisp forecheck and no-questions defense-first game plan. The Big Red consistently boast some of the nation's stingiest goaltenders and team defenses, but they are rarely confused for "electrifying".

What Cornell does well – and therefore, what Cornell alumni will do well – is know the systems by heart; play with the utmost sense of poise and responsibility; and put defense first, second, third, and fifth on the priority list.

Admittedly, I didn't see a whole lot of Greening this year... and when I did, it wasn't for him, but for the games in which he was playing. That said, I don't ever envision him being a star in the NHL, but he could certainly be a veteran role-player. His skill set is balanced and his hockey-sense is top-notch: he'll be a big asset on the special teams, and may make a strong second- or third-line energy player.

An alternate captain as a sophomore (the first soph "A" in Schafer's 15 years behind the bench) and co-captain as a junior and senior, Greening's value as a leader are not to be discounted, either.

Overall, Greening's potential is highly appealing: apart from his intangible smarts and leadership experience, he's a good-sized, hard-working guy who has demonstrated unflagging offensive flair and productivity since his days way back at Upper Canada College and Nanaimo in the BCHL. He's a naturally smooth skater and he isn't afraid to get dirty on top of the crease or lay the big hit when the opportunity presents itself.

He is a very well-rounded center who has been and will continue to be discounted because he played in the sniper-starved ECAC Hockey league. Hopefully that means the Sens will be able to keep him at a discount, because he could definitely be a major contributor down the line.