Share All sharing options for: A look at Senators prospect defenceman Michael Sdao 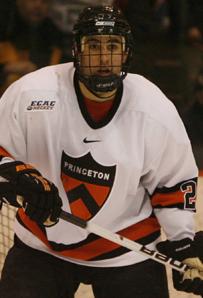 The following is a special report from Brian Sullivan, columnist at USCHO.com who follows the ECAC. He'll be giving us a few reports through the summer on some of the Senators' college prospects.

Let me begin by saying it's an honor (and honour) to write for a well-run and very visible Senators fan and news source, and that I certainly hope to be a part of future Sens coverage. My first bit for the Silver Seven is a rundown on Ottawa's three prospects that played in ECAC Hockey last season. In truth, it's more like two and a half rundowns, as there is bountiful information out there on Cornell's Colin Greening already. Not only was he honored as the recipient of the Lowe's Senior CLASS Award, but he's already signed pro as well. He also played for Mike Schafer in Ithaca, and while Shafer is a superb coach, he's a dreadfully sub-par phone-call-returner, so I've got that working against me. As far as these write-ups are concerned, it's hard to cover a dozen-team league on my own, much less pay attention to the nuances of individual players if they don't make themselves conspicuous. Ergo, these profiles are quote-heavy and stat-laden, as the last thing I want to do is take haphazard stabs at these players' attributes in a misguided attempt at ECAC Hockey omniscience. So without further ado, on to the first of the three: defenceman Michael Sdao.

Sdao just completed his first season of NCAA hockey, and it appears that he will be a force to be reckoned with down the line. "Michael led our team in hits as a freshman; he also led the defensemen in goals," said Princeton head coach Guy Gadowsky, himself a former Senator (albeit with the PEI Sens in '93-94). "I think that everybody knew that he was a big strong guy – leading the team in hits, I don't think anybody's surprised by that – but I think he has better offensive skills than people actually give him credit for, and he really shoots the puck: he is clocked at [shooting] 97 miles an hour. He's got a bomb, and we couldn't be happier with him. He certainly is the hardest worker on the team, he takes advantage of every minute of ice time that's available to him."

Princeton's 2009-10 campaign was a struggle from the get-go, as the Tigers were beset by injuries that had Gadowsky and his charges scrambling. At the best of times, a player or two was forced to play out of position; other nights, the Stripes had no choice but to play 17 skaters and no healthy scratches. Fortunately for the Sens and Tigers alike, the rookie Sdao was up to the mental, emotional, and physical tests presented by such a situation. "I think [the added responsibilities] really helped him. [Junior defenseman] Matt Godlewski had ACL surgery in the summer, and couldn't play until basically January. It really gave Michael the opportunity to go in and play right away, and he certainly had a lot of growing to do, but he did it early. He's a real student of the game, he watched a lot of tape with [assistant coach] Keith Fisher, and I think he really had a very steep learning curve. He learned a lot quickly, and because of the injuries we had, [he was] put in a lot of different situations and got a lot more ice time during games than a freshman normally would, and he grew a lot because of it."

"Being a defenseman is tough to adjust to right away," said Gadowsky, "and he's definitely learned a lot. In the college game, he has to continue to learn to play aggressively and stay out of the box. He improved a ton late in the season, and he has to continue to do that." Sdao led the Tigers with 48 PIM in 30 games, but a) he was a mere 21st in the league in that category, and b) he was one of only eight Tigers to play as many as 30 games (in the team's 31-game season), so take the figure with a grain of salt.

"It took me some time to get used to systems in college hockey," Sdao told USHL.com, as he played junior hockey with that league's Lincoln Stars. "There is an increased importance of each faceoff and special teams play in the college game, and only having only 22 regular-season games makes each point that much more important in college." There's a ubiquitous tendency for sports information departments – especially at the amateur level – to bump their players' heights and weights a bit, and why not? No one believes Buffalo's Nathan Gerbe is 5'6", unless he's on skates. Not the case with Sdao, who's listed at 6'4", 220 pounds on the Princeton web site. "Oh yeah, he's every bit of that, absolutely," laughed Gadowsky.

The coach was caught at a loss for words when asked to compare his dominating d-man to a current player or two. "He's a pretty unique kid. He really does have offensive skills, but he's a killer. He can hurt you, and you don't often find that mix," the coach continued. "I'm not sure if you asked him which one he likes better – seeing a forward coming down the ice with his head down, or taking a slapper in the slot – I'm not sure which one he enjoys more." Now if that's not an exciting prospect – in both senses of the word – then you're on the wrong site.

Still to come: Scouting reports of both Colin Greening and Mark Borowiecki.