Share All sharing options for: A look at Senators defence prospect Mark Borowiecki 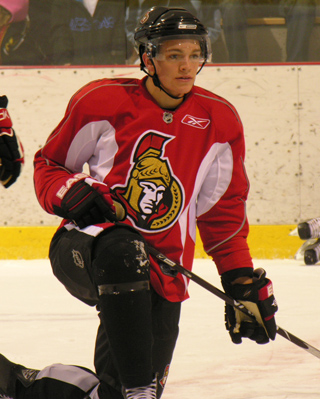 In my third installment, we'll take a look at the third and final of Ottawa's 2009-10 ECAC Hockey prospects. Not only was this one born in the metaphorical shadow of the Civic Centre, but he's blossoming just down an hour and a half down the road in Potsdam, N.Y.

Note to those with a lot of free time or extraordinary devotion to the team: Michael Sdao and Princeton make an annual trip northward to play at Clarkson (and cross-town rival St. Lawrence) on an as-of-yet unknown weekend next season; I'll do my best to keep you updated should anyone express an interest.

When NCAA seniors started signing with NHL clubs in earnest around late-March, early-April, I had my fingers crossed that Boston University's Eric Gryba (signed) and Clarkson's Borowiecki (unsigned) would be among those to put pen to paper with Ottawa.

My disappointment regarding Borowiecki's status quickly dissolved into embarrassed amusement when I realized that the big, tough, point-producing leader on the Golden Knights' blue-line was actually a sophomore.

"His first year, he wasn't confident enough to assume the role that he's assumed as a sophomore," said Clarkson head coach George Roll. "It was a feeling-out process as a freshman... and this year, he knew he had to assume a bigger role, and he did an outstanding job on the blue line for us, both offensively and defensively. His compete level is as good as any kid I've coached, and he's certainly a guy we're going to look to to be a leader in the future."

Clarkson, like Princeton, had a disappointing season. The Knights weren't saddled with the health concerns of the Tigers, but they simply couldn't get it going. Clarkson scored 50 goals, 11 fewer than anyone else in the league, and slogged through six-, eight- and nine-game winless streaks... including six- and eight-game losing skids.

Borowiecki was a bright spot in a dim year, however, finishing seventh on the team in points (19) and tied for fourth in goals (eight) in 35 games played. He was honored with the Mike Morrison Coaches’ Award for teamwork, hustle and dedication, and Roll sees a bright future for the Kanata native.

"His biggest asset is his competitiveness. As a coach, I know what I'm going to get game-in and game-out. He's going to take penalties because of the way he plays, and that's something you obviously want to limit. But his aggressiveness, to me, is what makes him an effective player. His skill set is good, his confidence grows ... as I saw this year in his ability to rush the puck, and jump into the rush and quarterback our power play, and do all the things we needed him to do as a sophomore, which was a lot to ask.

While the second-year workhorse put up good offensive numbers on a goal-starved squad, it remains to be seen what his true offensive abilities are: he only scored one goal with one assist in 33 games as a freshman.

"At the next level, it might be the case" that he becomes a stay-at-home defenseman, said Roll, "but I have a lot of confidence that we haven't seen him top out in terms of his offensive ability. He has a lot of similarities to Grant Clitsome (Clarkson class of '08, played his first 11 NHL games with Columbus this year), who was here before: I see that same type of development that we saw with Grant."

Not quite as big as Sdao, Borowiecki's still got a little ways to go before being considered a true bruiser.

"By the time summer ends, I would like him to be 210, maybe 205, something in that range," said his coach. "He's a well-conditioned kid. He's committed to getting to the next level, and making himself as good a player as he can be so when that next step comes, he'll be ready."

The blue-liner has a few things to iron out before he's ready to matriculate from Potsdam, but they're not huge roadblocks, according to Roll.

"Clearly, especially in offensive terms, the ability to see the ice and make the extra pass. There are situations where again, I think it's more (about) confidence than not having the ability to do it. I think he has the ability, but I think that as his confidence grows, he'll be able to do those things. There's always areas for improvement: I think his foot speed – although it's good – I think it needs to improve, and certainly his vision, that would be an area I think he could improve on. But then, every player could improve on those things."

Roll didn't have to think much in order to come up with a reason why Borowiecki would be attractive to an NHL organization.

"I think it's the fact that they know what they're going to get. He's a very receptive young man in terms of coaching: if we want him to be a shut-down guy, he'll be a shut-down guy. He'll accept whatever role a coach assigns to him, and willingly do that. Do I see him being an offensive guy at the next level? No, but I can see him being a shut-down guy that's quite physical, in your face, who will win a lot of battles down low and be a big presence out there."