For a meaningless game, a lot happened tonight.  I'm not going to waste time with the fluff introductions I normally write.  Grab yourself a beverage and let's get right into it:

Alex Kovalev injured his knee -  The extent of the injury isn't currently know, but this is really bad news for the Senators if he misses any time.  Kovalev has more than his fair share of detractors (right or wrong) but historically he is almost a point-a-game player in the playoffs, including five goals and six assists in 12 games in 2007-08 with Montreal.  Whether the Sens play the Devils or Penguins in round one, the road will be much tougher if Kovalev is not in the lineup.

Andrej Meszaros was hit in the neck with a puck - Definitely the scariest moment of the game.  An Erik Karlsson shot deflected off of Martin St. Louis and struck Meszaros in the neck where it meets the jaw.  After getting back to his feet, the former Sens defenseman made a beeline for the bench accompanied by a trainer and sat in the tunnel.  At one point a stretcher was brought out, but he returned later in the game.  Hard to question a guy's toughness after something like that.

Jared Cowen made his debut - I didn't really notice him too much, which I suppose is a good thing.  He did not make any glaring mistakes in 6:46 of ice time, but was called for one of the weakest hooking penalties I've seen all year.  Tampa Bay scored on the power play to make it 3-0.  Welcome to the NHL, kid.  He didn't play as lazily as we were warned he might, but he also looked a little caught off guard by the speed of the game -- not unlike Erik Karlsson from earlier this year.  Luckily, Cowen was able to use his size to recover in most cases.

The Sens were brutally outplayed in the first period, getting outshot 13-7 and walking away with a 2-0 hole that would only grow larger, as mentioned above.  This was a period from the Senators of old, with another visit from our old friend the "Too Many Men on the Ice" penalty.  Goaltender Brian Elliott let in a terrible goal -- the kind that end playoff series in the opponent's favor.  It was ugly, and it only got uglier.

Fight Night: The second period didn't start any better than the first, with the Lightning dominating the play at both ends of the ice and the Senators looking like a disinterested team.  That's when the line of Ruutu, Kelly, and Neil, decided to take matters into their own hands.  Ruutu showed that he was already in playoff form, taking a cheap little run at Lightning winger Alex Tanguay.  His teammate, Todd Fedoruk, took exception to the hit and expressed this sentiment by attempting to cave in Ruutu's face.  Ruutu dove dropped to the ice immediately, and Neil immediately challenged Fedoruk.  Fedoruk did not oblige, as he was in a pile on top of Ruutu at that point.  Neil stood around looking angry and trying to find someone to fight.  He wouldn't get his wish... yet.  Result:  Double minor to Fedoruk for roughing.

Several Sens were chirping at Fedoruk after that and well known goon and international badass Mike Fisher decided to go out and teach some punks some lessons.  His target was Lightning defenseman Victor Hedman, who was probably feeling safe with out Anton Volchenkov in the lineup.  That sense of security was misplaced.  Fisher challenged Hedman after a battle in the corner and the big defenseman tried to apply a headlock, as if he was wrestling with his little brother.  This proved to be a poor decision.  Result:  Fisher crumpled Hedman with a left.

Fight Night continues: Just 35 seconds later, Chris Neil found a dance partner.  It was a very odd series of events.  Lightning goalie Mike Smith attempted to clear a puck though Neil, which he surprisingly took exception to, and responded by tripping the goalie.  Goalie contact is a no-no, but Smith decided to address this matter himself and jumped Neil.  Neil ruined his chances at a Lady Byng Trophy by obliging but Mattias Ohlund jumped him from behind with a headlock before things could get ugly.  Not Neil's finest moment, but both teams were fired up from this point on.  Result: Nick Foligno power play goal.

Fight Night concludes:  Matt Carkner sought out Fedoruk after things had calmed down a bit and attempted payback for the free rhinoplasty Ruuto had gotten earlier.  This wasn't much more than a wrestling match, but it served as a cap on a second period that saw the Sens get fired up in a big way.  Not six seconds later, Stephane Veilleux would get called for slashing and Jason Spezza would net Ottawa's second power play goal of the game.  Carkner would also seek out Steve Downie at the end of the overtime period but could not give him the repeat beating he deserved.

Not done:  Tampa Bay would pick up two more penalties in the third period and the Ottawa power play would strike for the third time, with Mike Fisher using his new patented stealth move to creep to the open side of the net yet again.  So on the night, Fisher had a goal and a one-punch win, as well as hitting a post in OT.  One might say he had a good game.  Or, one might say: 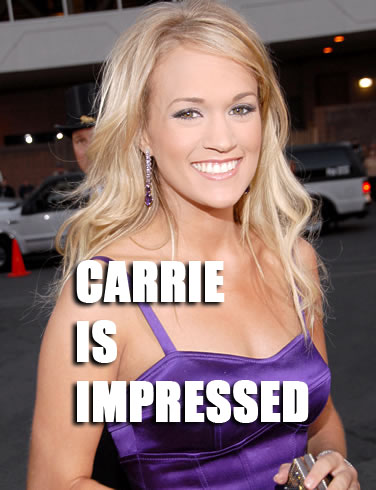 But Hasse was not:  Meanwhile, Daniel Alfredsson played an absolutely dominant game on the ice but only came away with two primary assists for his effort.  He also charged in, gloves off, to help Chris Neil during the Neil/Smith debacle. Alfie had the puck on a string tonight and was the best player on the ice, bar none.  He needs just one point in the final game of the year to hit 70 for a twelfth consecutive year nothing, since his two points put him at 71 for the year.  (Thanks, Rob D.)  Alfie can now simply enjoy the final game of the year by continuing to personally own the Buffalo Sabres.

Honorable Mention:  Matt Cullen, who played yet another game with playoff intensity.  He only had an assist to show for it, but this guy is ready for the second season.   He is worth the second rounder in every way.  It's worth noting that Cullen was the second player to join the Neil/Smith debacle with gloves off.  He immediately began the task of pulling Ohlund off of Neil.  He is the kind of player every team must want.

Sens Killers: Mike Smith, Steven Stamkos
Smith must have been riding an adrenaline rush after the scrap with Neil, because he began to turn in outstanding save after outstanding save.  The Tampa Bay announcers called this "Vintage" Mike Smith, apparently because they had never seen him play before tonight.

Stamkos, on the other hand, had a goal and an assist on a game high eight(!) shots.  If there's a player with a quicker release in the NHL, I don't know who it is.  It's like the puck is off his stick before he's even started his follow through.  He's frighteningly good offensively, especially once you stop to think about how young he is.

Life without Volchenkov:  I can't prove it, but I think the Senators' sluggish start in the first period was a symptom of Android not being in the lineup.  The 13 shots Elliott faced certainly were.  It's good that he was rested, but it should be clear to GM Bryan Murray exactly what he'll be missing if he lets Volchenkov go.

Here's a shot chart, you earned it: