The road to the playoffs: How the Ottawa Senators got in

Share All sharing options for: The road to the playoffs: How the Ottawa Senators got in 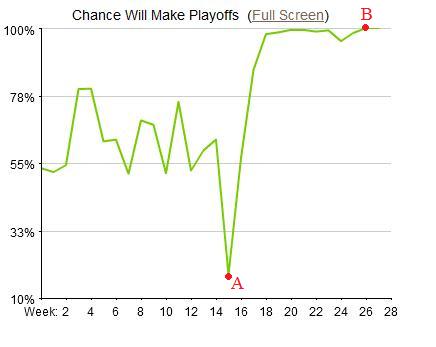 The whole season has been a bit of a roller-coaster ride towards what was cemented on Thursday night. The Ottawa Senators, like every other team in the league, started with a slightly-better-than 50 per cent chance of making the playoffs. Those chances took a hit with a loss in the season opener, got better, then got worse, and continued jumping up and down for much of the first part of the season--until the new year, when those chances absolutely plummeted.

The chart at the top of this post is a graphical interpretation of the Senators' statistical chances of making the playoffs over the course of the season, courtesy of Sports Club Stats. The season actually started pretty well, and at one point (on Oct. 18, 2010), they had gotten up to an 80.43 per cent chance of making the post-season. That was pretty early in the season, though, and things would get worse before they got better. And they would get abysmal before they got to that ultimate goal: Clinching a playoff berth.

The low point on that chart, indicated by the letter A, was the low point of the season. It was January 12, 2010, and the Senators had just finished a game against the Atlanta Thrashers on the wrong end of a 6-1 score. It was the Senators' fifth consecutive loss, and dropped them into ninth in the conference, with a 17.09 per cent chance of climbing back up into the playoff picture. Things in the city looked very bleak.

Then something unexpected happened. The Senators took a day off in New York City, heading to Central Park to play outdoor-rink dodgeball. Then they won 2-0 over the New York Rangers, with Mike 'Not Martin' Brodeur in net getting the shutout. Then they beat the Montreal Canadiens, and the Boston Bruins; they went on an eleven-game winning streak to skyrocket up the standings, heading into the Olympic break having won 14 of 16 games and in fifth place in the conference, well within striking distance of the Northeast Division-leading Buffalo Sabres.

Again, though, the Sens would hit a snag. Another five-game losing streak, but this one hardly affected their playoff hopes--mostly thanks to the ineptitude of their conference counterparts. Their fifth straight loss, 5-4 against the Dallas Stars, dropped their chances to 91.36 per cent.

It bounced right back, though, thanks to Ottawa's current six game winning streak, the most recent win indicated by point B on the graph: The Senators' playoff-clinching 4-3 shootout win over the Carolina Hurricanes. An impressive come-from behind victory, which is only fitting, considering how far behind the Senators were at one point in the season--and where they stand afterwards.

Now, to wait for the second season to start...