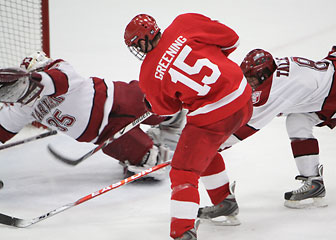 The Ottawa Senators announced today that they have signed prospect Colin Greening to a one-year entry level contract. Greening was a 7th round pick of the Senators in the 2005 NHL Entry Draft who has spent the past four years playing NCAA division 1 hockey.

In 34 games with Cornell this season, the 6'2" 211lb centre netted 15 goals and 35 points. Greening was also recently named the ECAC hockey-student athlete of the year and was recognized with the Lowe’s Senior CLASS award, presented annually to the most outstanding senior student-athlete in NCAA men’s division I hockey.