Share All sharing options for: Secondary scoring not an issue for 2009-2010 Sens

I decided to crunch the numbers and see if the Senators really are a one-line team, or at least, are any worse off than the other Eastern Conference teams.

My method is as follows: I look at a team's total goal output (as of Mar. 31st), then subtract the number of goals that their top 3 goalscorers had. It's far from perfect, because sometimes a team's second line will have a top 3 goalscorer (as is the case with the Senators in Mike Fisher), but it's a fairly good indicator that the team has a plethora of scoring threats. Here's the table:

And for those of you who like column charts, here you go: 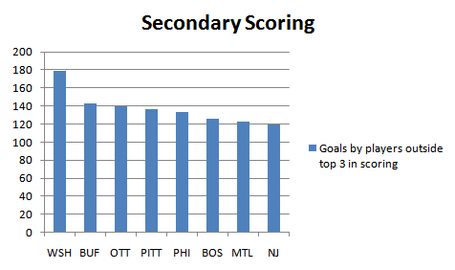 Of course, that doesn't paint the full picture because the teams that score more goals (like Washington) are at the top simply because of their more offensive system. Therefore, here is a column chart showing the percentage of a team's goals scored by secondary scorers: 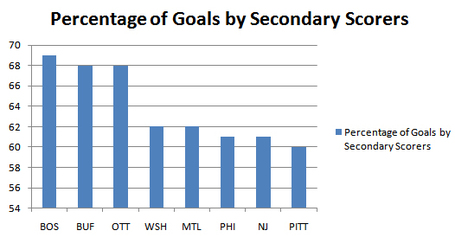 As you  can see, the argument that the Senators struggle to get goals from players not on their top line is greatly overblown. Ottawa is in the top three of total goals scored by players outside of their top 3 scorers, and also in the top 3 for percentage of goals scored by those secondary scorers. Mike Fisher is actually tied for the Senators' goal lead with 22 while Alex Kovalev is in fourth with 18, and both have played exclusively on the second line. If Milan Michalek returns from injury, he'll also likely be playing on the second line given Peter Regin's chemistry with Jason Spezza and Daniel Alfredsson, further bolstering the second line's output. Finally, it should also be noted that the Senators' point totals don't really feature the impact of newly added Matt Cullen, who adds even more of a secondary scoring punch.