Are the Senators a third period team?

Share All sharing options for: Are the Senators a third period team?

From January 19th, 2009 to January 23rd, 2009, the Ottawa Senators were outshot 39-10 in the third period.  Of course, this was also during the middle of their team-record winning streak, and during that mentioned span they notched victories against Chicago, St. Louis, and Boston.  Still, getting outshot by St. Louis 15-3 was a little unnerving, and I began to track this stat with an eye on the playoffs and one question in mind:

Was the team getting outplayed in the third period (practically the kiss of death in the playoffs) or were they good at protecting the lead (a key skill to advancing in the playoffs)?

I now present to you my findings in the form of an awesome pie chart: 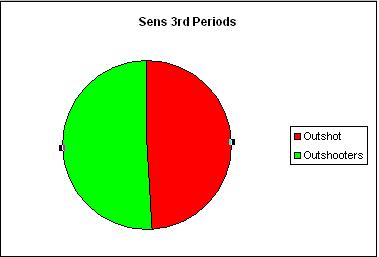 That's right.  Out of 82 games, the Senators outshot their opponents in the third period 51% of the time.

Since that was essentially useless -- the team's winning percentage is not .500 -- I began to look for more data.

Statistics need to be taken with a grain of salt, since hockey is not a game played under controlled conditions in a scientific sense.  With that in mind, I looked for specific correlative data -- in this case, goal differential heading into the third period.  If the Senators were getting outshot with a large lead, they were simply playing defense.  If they were getting outshot with an even or negative differential, then play was being dictated by the other team.  These numbers do not take into account power plays and penalty kills, as I felt those fell under the umbrella of momentum in one direction or the other.  I also chose to count overtime losses as simply losses; again, the playoffs were what I cared about here and thankfully a loss is still just a loss there.

What I found is at least worth sharing.

First, the team's record when trailing, even, and leading:

This is pretty straightforward, but I believe a little theorizing is in order.  The system head coach Cory Clouston has implemented in Ottawa is predicated upon creating and capitalizing upon turnovers.  The first forechecking player in the opponent's zone must force his man to make a quick decision.  The second forechecker is required to read that decision and try to make a play on the puck.  Should that not occur, it becomes the remaining forward's responsibility to try to force a turnover in the neutral zone.  If they aren't able to do that, their responsibility becomes to force the play to one wall or the other and allow their defensemen to make a play -- this is how Volchenkov and Sutton are able to line up guys for big hits.  This is a pretty basic interpretation, and I certainly don't claim to know the intricacies of Clouston's system, but at its most empirical, this is what we're looking at.

This essentially creates a double-edged sword for the team.  Faced with a need to create offense, teams are more prone to turnovers, and the Senators are able to capitalize -- hence 41 of 44 wins coming from a lead or even strength.  When teams are not faced with that need, they are content to simply get the puck to the neutral zone.  When the Sens are not creating turnovers, they have a much more difficult time generating offense.

At least... that's the theory.  The proof should come in the numbers -- the majority of games where Ottawa was outshot in the third period should be with an Ottawa lead. This would mean that the team was playing opportunistically, i.e. content to play defense and take their shots on generated turnovers.  Conversely, if the team was down, they should be outshooting their opponents in the third period, and this should mean that they have strayed from their system and are instead relying on shot volume to generate offense.

With this in mind, I charted whether the team was outshot versus the team's goal differential across all 82 games.  On this chart, a value of one represents a game where the team was outshot (even shots in the third were considered the same as being outshot for the purposes of the chart) and a positive goal differential represents a Senators lead: 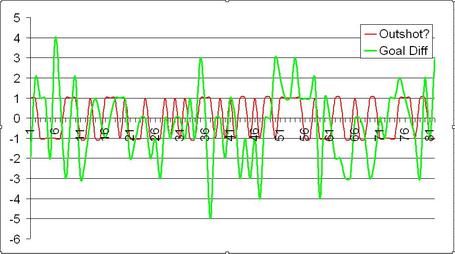 Needless to say, the results are erratic.  Here's the bottom line:

I wish the numbers were more favorable.  Are the Senators a third period team?  Flip a coin... some nights, yes; some nights, no.  The numbers float far too close to 50% on how they will play to offer a definitive answer.  However, if you're looking for an explanation for the streaky nature of the team this year, I think this is a good starting point.  This is an admittedly small statistic of a larger game, but it illustrates the consistent inconsistency we've seen all year pretty well.  Anyone who tells you they know which Senators team is going to show up for any game of the playoffs is mistaken.

If there's a silver lining to this data, it's definitely the team's record when even or leading.  This is a team that most likely is going to be in every game after 40 minutes. Don't turn off the game regardless of the score -- you don't know which team is going to show up.