Although the Ottawa Senators lost 5-2 to the Buffalo Sabres in their final regular-season game, there was still a pretty happy feeling going into and coming out of this game. Going in, because an extremely well-done celebration of Daniel Alfredsson's 1000th NHL game got everyone in a good mood. And coming out because, despite the loss, the Senators will return to the playoffs after an agonizingly long one-year hiatus to the post-season. Hard to get too bent out of shape over a regular season lost when the second season is about to begin.

First off, the happy part: Alfredsson's ceremony. From start to finish , it was very well done. Started with a video homage to Alfredsson's career, featuring his many hairstyles, as well as some other highlights--including a finale with Alfie's series-winning goal against Buffalo in the 2007 Eastern Conference Finals. Through the video, Alfie was tuned to the screen, and was beaming with happiness looking back (particularly laughing at his Mats Sundin faux-stick-throw). From there, the awards: Erik Karlsson brought a jersey from the only other pro team Alfie's played for, the Frolunda Indians; associate captains Mike Fisher and Chris Phillips brought out a silver stick from the teammates; and Eugene Melnyk offered a silver puck to commemorate the occasion. A really slick painting honouring Alfie, from golfball helmet to SNES jersey, was also unveiled. Then came the speech.

To start off, Alfredsson thanked the Sabres for coming out in advance, and for their patience--so much class (props to the Sabres, too, for giving him that respect). He talked about what you'd expect: His disbelief that he would have had such a career so far, thanks everyone from the medical and non-hockey staff for the Sens to his family members, and thanked the team by telling them us "It is an honour to be the captain of your team."

Now, onto the actual game... 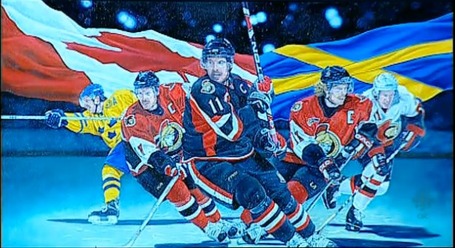 The sweet painting, thanks Crooklyn

Alfredsson? Do I need to explain? Well, okay. He was strong. It wasn't a particularly great game for Alfie, but the fact that he kept his emotions in check to play an actual game is pretty impressive. It was a shame that he wasn't able to score a goal--his teammates tried damn hard to get him one--but it's okay, he can save his scoring for the playoffs.

Speaking of the playoffs, Cullen is quite obviously ready for them. He was outstanding tonight, even if he didn't get a point: Eight shots on net, 6-for-8 in the faceoff circle. We've all got to be at least a little concerned given that Alex Kovalev will miss the whole playoff run, but the way Cullen played tonight, he'll certainly help compensate for the loss.

We've got to give Chum a hero's treatment tonight, if only for the fact that it might have been his final game in an Ottawa Senators uniform. His patented drive-to-the-net style got him a goal, so if he is done as a Senator, he's going out in style. If he's not re-signed, I'll miss his team-first approach.

Regin had another solid game tonight. It will be tough for him to carry the momentum forward into his first taste of the post-season, but he's got the linemates to do it. He had an assist tonight, and only a couple of shots, but he was playing some very solid hockey, and was a big reason why the second powerplay unit looked kind of good on the ice.

Sens killers: Thomas Vanek, Ryan Miller
Easy to see why Vanek was a Sens killer tonight: Four goals on six shots in 16:06 TOI. It seemed like whenever he was on the ice, the puck was in the net, and he's one guy who looks amped for the playoffs.

Miller, similarly, is ready to go. And he doesn't look like he's feeling any ill effects from playing so many regular season and Olympic games this season. Any time the Senators looked to be getting back into the game and gaining an edge in momentum, Miller would be there to shut them down.

Room for improvement: Pascal Leclaire
Leclaire started out strong tonight, and he looked confident--although I guess that shouldn't surprise us. He was consistently on top of his crease challenging the shooter and cutting down the angles. Unfortunately, that proved to be his downfall, because he didn't have the defensive support to clear rebounds when he made the first save. Three of the goals were rebounds, one was an unstoppable tip-in, and the fifth was a penalty shot--hard to fault him too much, but he could stand to work on his rebound control.

Meanie: Andy Sutton
Sutton was also in playoff form tonight, in terms of the physical intensity and downright meanness he played with. He started off by annihilating Drew Stafford with a huge hit in the first, and also launched an admittedly dirty slash to the back of Vanek's legs. Vanek got a penalty shot (and goal) for his pain, but you can bet he'll feel that tomorrow. In a seven-game playoff series, a bruiser like Sutton will be valuable.

Other awesomeness:
After the ceremony and national anthems, Alfie kissed his wife Bibi--who looked proud through the whole thing--and she said to him, "Go win a hockey game." He didn't, but I don't really think that matters on this night.