Erik Karlsson: An introspective of his rookie season

Share All sharing options for: Erik Karlsson: An introspective of his rookie season 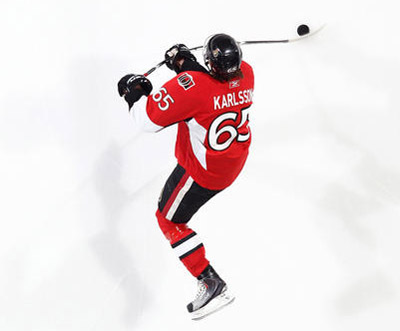 Erik Karlsson has had a pretty good run lately. With 6 assists in his last 3 games, Karlsson has found himself third in rookie scoring amongst defencemen behind Michael Del Zotto of the New York Rangers and Tyler Myers of the Buffalo Sabres. Now that Karlsson seems to have found his stride, it's as good a time as any to look at how his rookie season compares to those of some of the best offensive defenders in the NHL. 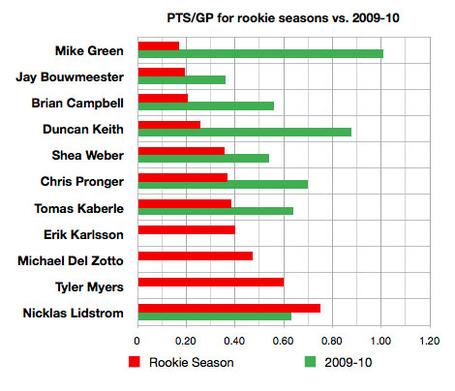 Here we have a sampling of a handful of veterans known for having some offensive skill and the three top-scoring rookies this season. Michael Del Zotto and Tyler Myers are already leaps and bounds ahead of the rookie seasons of every player listed not named Nicklas Lidstrom. In fact, if Del Zotto and Myers both failed to register a point for the remainder of the season, they both would finish above Tomas Kaberle in points per game.

The best comparable for Erik Karlsson is Tomas Kaberle. In his rookie season (1998-99) Kaberle had 4 goals and 18 assists for 22 points in 57 games, while Karlsson currently has 22 points in 55 games. Neither one is much for scoring goals (Kaberle’s career high is 11 in a season), but instead they rack up assists on the power play. If you’re looking for what to expect out of Karlsson down the road, you may need to look no further than Tomas Kaberle. 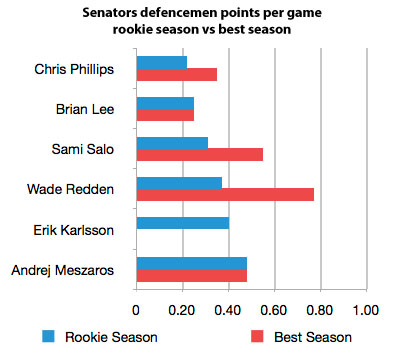 Compared to Senators rookies of the past, Karlsson is already outperforming the inaugural seasons of players like Sami Salo and Wade Redden. In 1996-97, Redden scored 30 points while playing all 82 games. Comparatively, with his current points per game average Erik Karlsson projects to 33 points over an 82 game season. As maligned as he is now, Redden was a very good defenceman in his early years, and at his peak had 50 points in 65 games (an average of 0.77 points/game). That's pretty good company right there.

Andrej Meszaros is an interesting case. Currently in his fifth NHL season, Meszaros has never surpassed the points he put up in his rookie year. His average points per game that season? 0.48. Two seasons ago (his last in Ottawa), it was 0.44. His first in Tampa Bay: 0.31. This season: 0.18. Meszaros is an example of why projections aren't foolproof, and his contract is an example of why paying for potential is risky. 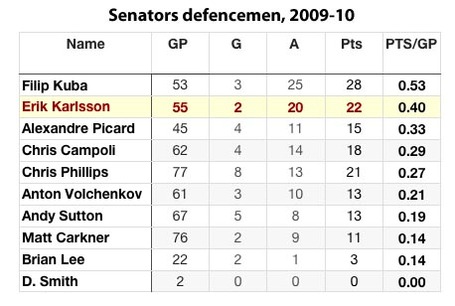 Karlsson is second in team scoring amongst defencemen, with 1 point more than Chris Phillips… in 22 fewer games. Considering all the criticism Filip Kuba has gotten this season amongst Senators fans, it's interesting to see him atop the list in both total points and points per game. It'll be interesting to see how Kuba fares once he returns from injury now that Karlsson seems to have cemented his role as the first unit power play quarterback, as both players have earned 40% of their total points while playing with the extra man.

If you look to the bottom of the list, you'll see Brian Lee tied with matt Carkner at a paltry 0.14 points per game. Many people thought of Lee as the answer to the need for a puck-moving defenceman and Karlsson as the answer to Lee's inability to meet expectations, though GM Bryan Murray has been quick to comment that Lee was never supposed to be the same type of player as Karlsson. Regardless, Karlsson's future already looks far brighter than Lee's.

Meanwhile, poor Derek Smith hasn't had much of a chance to show off his skills at the NHL level. D. Smith does have a 0.65 point per game average in his third season in Binghamton, but his NHL future is cloudy at best.

The verdict: expect Karlsson to lead the Senators' defence in scoring next season as he takes more ice time away from Filip Kuba. 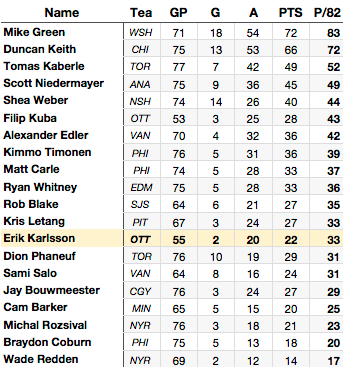 One last sampling of Erik Karlsson against some big name players, this time by points per game pro-rated over an 82-game schedule. Karlsson is neck-and-neck with Pittsburgh's Kris Letang, who just signed a four-year extension at $3.5 million per year. Karlsson's rookie season also has him putting up more points per game than Dion Phaneuf, Sami Salo, and Cam Barker. He's also outperforming Wade Redden (New York Rangers edition), but is that really a surprise to anyone?

Finally, just for fun, here's how Karlsson stacks up against Calgary's Jay Bouwmeester:

Bouwmeester may be having an off year, but Karlsson's a rookie and Bouwmeester is a 7-year veteran with a $7 million paycheque. Karlsson's got a higher points per game average (0.40 vs. 0.36) while playing an average of 6:00 less per game. Karlsson's a -10 on a team that's a cumulative -10, while Bouwmeester is +1 on a team with a cumulative +2. The salary per goal, assist, and point numbers aren't useful for much other than entertainment, but note that Bouwmeester costs more than six times per each point than Karlsson. Entry-level deal or not, Karlsson's a bona fide discount over Bouwmeester. He's also surprisingly physical: 42 hits as a 5'11" rookie is pretty impressive.

Conclusion: Karlsson should have a bright future ahead of him. He's already an incredible passer, and once he smartens up on his shot timing his goal totals should climb. I still think Kaberle's the best comparable, and if that's the case then the Senators may have finally found that elusive elite puck-mover.