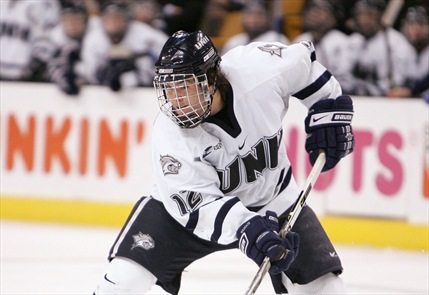 Recent college signing Bobby Butler has been named as a top three finalist for the prestigious Hobey Baker award, awarded annually to college hockey's top player. The Hobey Baker website also gave him a heck of a write up:

Bobby Butler is one incredible person.  He is a finalist for not one, but three prestigious individual hockey awards: the Hobey Baker Award, the Hockey Humanitarian Award and the Walter Brown Award.  Already named the Walter Brown recipient as the best American-born college player in New England, Butler has evolved into a prolific goal scorer leading the nation bagging 29 goals in 39 games this past season.  He chipped in with 24 assists to total 53 points, tied for second best in the country.  The Wildcat captain tied for the conference scoring lead in Hockey East tallying 41 total points and led the circuit in goals, helping UNH to the regular season title.  His efforts earned him Player of the Year honors in Hockey East and a berth as a First Team all-star.  Butler is a Health Management Major and recently signed as a free agent with the Ottawa Senators.  His outreach into the community is extensive.  Butler volunteers for every assignment involving the hockey program, has attended a local middle school every week for the past three years working with special needs students, has mentored two children (one who lost his father to cancer and another child battling leukemia) and volunteers with his teammates in the Reading Across America program at area schools.