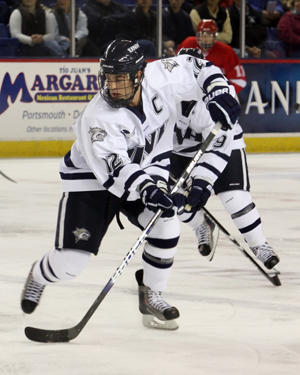 The Ottawa Senators are about to sign 22-year old college hockey star Bobby Butler to a two-year deal. Terms of the deal were not disclosed. Butler played for the University of New Hampshire Wildcats until they were knocked out of the NCAA Hockey Tournament by the RIT Tigers (the same Tigers who knocked out prospect Patrick Wiercioch's Denver Pioneers earlier in the tourney).

Butler, a 6'0", 185lb right-winger, had an incredible senior season. He posted 53 points in 39 games, including a league-high 29 goals. He had 30 points last season, and 26 the year before. He was named Hockey East Player of the Year, and is currently a Top 10 Finalist for the prestigous Hobey Baker award. You can find out more about Butler's impressive resume by checking out this website.

Butler was considered one of the prizes of this year's NCAA crop, so it's a great pick-up by Bryan Murray, particularly considering he's a goal-scoring right-winger, a position of weakness in the Senators depth chart.

This news has not been confirmed by any major sports outlet yet, but CBC's Elliotte Friedman had earlier made it sound as though the deal was all but completed. He said today that Butler is meeting with the Sens in Washington to finalize the contract.

One downside to this guy? Sometimes it's hard to tell he's scored because he puts it through the netting, Shea Weber style:

Special thanks to user Jeff Sullivan for the heads up.