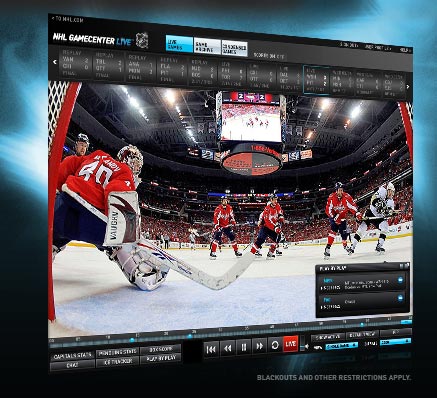 For someone living outside of the city of Ottawa (or wherever your favourite team happens to be located), NHL Gamecenter Live seems like a dream come true. Living in BC has prevented me from getting all of the Ottawa Senators television coverage I wanted (thanks, Rogers Sportsnet), so being able to live stream games over the internet should solve my woes, right?

Well, yes, and no. I've spent the past couple of months getting the most out of my Gamecentre Live account, and I've come away fairly impressed, yet not totally convinced by it. Read past the jump for my take on the NHL's game-streaming program.

Online streaming of sporting events is the way the planet is heading, and the NHL is running a great system at the moment. The technology isn't perfect yet, but it's certainly commendable. The biggest problem, and one that is going to be a dealbreaker for a lot of people, is the sheer volume of games that are unavailable to watch because of regional blackouts. Gamecenter Live is not a great substitute for those living without cable or satellite TV, but more of a supplement to their television package. At its current price point, it may be hard to justify that for a lot of people.

For more information, check out the Gamecenter Live website.

Disclosure: I received a free NHL Gamecenter LIVE account in exchange for providing this review of the product. Sweet deal, right?