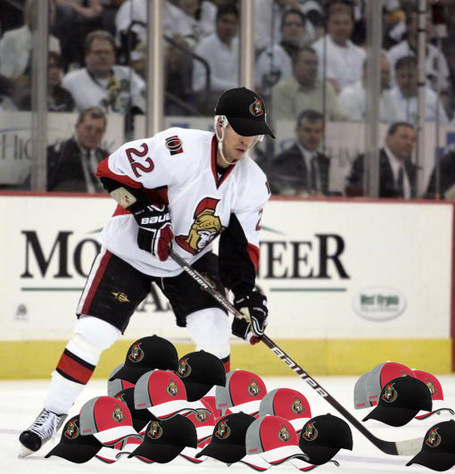 While all eyes were on Bobby Butler to see if he could add some goalscoring to the Senators' roster, it was Chris Kelly who actually put the pucks in the back of the net -- three of them, in fact. The Senators didn't get a goal from anyone else on their roster, and though they allowed a shorthanded goal against from Brandon Prust in the second period, Kelly's three goals were enough to get them the win.

Let's just see if the Senators can use this momentum and win another game. We'll also see if anyone not named Chris Kelly can score next game.

Sens Hero: Chris Kelly
I'm sure you saw this coming. Kelly scored his first goal while shorthanded, his second at even strength, and his third one into an empty net. It was Kelly's first NHL regular season hat trick (he had one this preseason, coincidentally also against the Rangers), and it was simply a huge performance from Kelly when the team needed it most. The three goals helped Kelly double his total, giving him six on the season.

Sens Hero: Pascal Leclaire
Leclaire finally got the goal support he needed to get his second win of the season. He made a number of key saves when the defense in front of him faltered, and the only goal he let in was a two-on-one where Erik Karlsson let shooter Brandon Prust have far too much time and space. Without the solid performance from Leclaire to keep the game tied 1-1 in the second, the result could have been very, very different.

What about Bob(by)?
Bobby Butler's first NHL game of the season wasn't anything special. He was a bit lost to start the game, likely due to him playing his off wing. He also looked a bit gassed by the end of it, likely due to it being his third game in three days. He missed the net on any of his shot attempts, and he was easily bumped off the puck by the opposing defensemen. That being said, Butler showed good hustle and some good positioning through the game, and I imagine that with fresh legs and a little bit of practice, he'll continue to improve.

The Good: Faceoffs
Ottawa continued to shine in the faceoff circle, winning 31 of 51 draws on the night. Leading the way was none other than Sens Hero Chris Kelly, who won 67% of his draws.

The Bad: Penalties
Ottawa had one powerplay. The Rangers had four. You can see how this might be a bad thing.