Senators disappoint in 2-1 loss to Stars

Share All sharing options for: Senators disappoint in 2-1 loss to Stars

I'll admit I didn't get a chance to watch this game, but when you lose to a team coming off a humiliation at the hands of Toronto... well, that ain't good.  Since I didn't see the game, I'm going to draw unfair conclusions based on the box score and whatever highlights I can find.  This recap is going be filled with things I know (so be prepared for a short recap - HIYO!)

What I know:  In two games without Erik Karlsson, the team now has 19 shots in two consecutive games.

What I know: Not many teams are going to win games only taking 19 shots.  The Ottawa Senators are not one of those teams, regardless of what happened against Los Angeles.

What I know: Ryan Shannon cannot be the team's lone goal-scorer if they want to win games.

What I know:  Between the saves in the highlights and being named the game's third star, Pascal Leclaire needs to get another start.

Yikes, that's about it.  Inconsistency remains the hallmark of this team, and a quarter of the way through the season, that's a little scary to think about.  Quite frankly, this is a team that Ottawa should have beaten, and to see them lose by such a low score is a little disturbing.

What I know:  Calling up Bobby Butler to add some offense is unfair to his development and an unrealistic expectation for a rookie.  The current forwards on this team need to do a better job of scoring, because there's no help coming anytime soon.

Ok, enough doom and gloom.  The team has two more winnable games this week, and they're going to win them.  Who's with me? 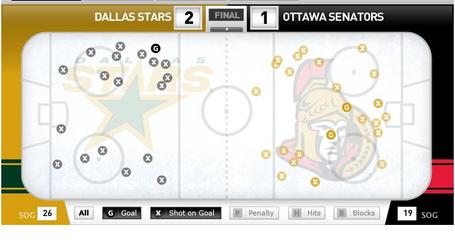