How important are the Ottawa Senators' next five games?

Share All sharing options for: How important are the Ottawa Senators' next five games?

As crazy as it seems, the Ottawa Senators may be at a pivotal point in the still young season. Now past the ten-game mark, and near the bottom in both their division and conference, the Senators can scarcely afford to wait much longer to find their stride, and start winning games with regularity.

As it stands this morning, Ottawa is only three points out of a 'playoff spot' and six points off the division and conference lead. And though it seems ridiculous to be considering playoff spots already, if Ottawa's able to draw back in to the top eight in the conference, it means at least they're able to keep pace with the other contenders, rather than falling further behind. Truly, that is the key: The Senators need to find a way to get into the top half of the conference standings quickly, or else they'll need some serious heroics in the later parts of the season to make up the ground lost.

On the plus side, most of the next five games should be winnable for the Senators--starting tonight, against the Maple Leafs.

Here's how the next five games look for the Senators:

Assuming that the Senators will lose to Montreal because a) they were completely outclassed last time the two teams met, and b) it's on a Saturday night, you're looking at three teams at or around the Senators' current record, and three very winnable games, all against conference opponents who we seem likely to be battling for playoff spots against. Throw in a Canucks team that has been struggling as much as the Senators (although they seem to have picked up their game in the last few games), and the Senators could make their picture a much pretty one with a good showing.

Take a look at the standings, before last night's Devils - Canucks game was over: 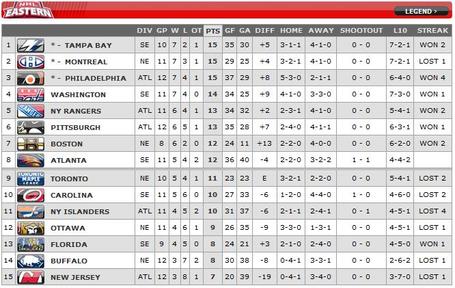 It's no coincidence that most of the teams in the top half of the conference are on winning streaks, while most of those in the bottom have lost most recently: The season is still young, and a couple wins move you up in the standings (just ask the Flyers) as quickly as a couple of losses will bump you down (just ask the Leafs). If the Ottawa Senators are able to string together more wins than losses in their next five games, it will be pivotal in moving them back into playoff contention. If they're able to win the winnable games and steal one (or even both) against the Habs or 'Nucks, then even better. If they do neither of those, the playoff push may be virtually over before it even begins (or at least reliant on a miraculous 11-game winning streak to re-awaken).

The time for the Senators to get back in to the playoff picture is quickly fading, especially considering the Eastern Conference has already given out 14 loser points from games dropped in overtime. The next five games, four against conference opponents including two against divisional rivals, will go a long way in showing us what we might be able to hope for this season from the Senators.