The Ottawa Senators' dearth of offence

Share All sharing options for: The Ottawa Senators' dearth of offence

It's no secret that the last four games have not been pretty for the Ottawa Senators. As impressive as the 2-0 victory over the Boston Bruins was, huge losses to the Vancouver Canucks, Philadelphia Flyers, and Carolina Hurricanes exposed serious chinks in the Sens' armour.

And although allowing 18 goals over the last four games makes us think of defensive and goaltending deficiencies, scoring only six goals over that span represents a dramatic and perhaps more worrisome lack of goal scoring. In fact, goal-scoring problems through much of the lineup have been masked for most of November by the once-hot line of Jason Spezza centering Peter Regin and Alex Kovalev.

The three aforementioned players, who form the top line, scored seven of the 14 goals Senators forwards have scored in November. The bottom nine forwards scored the other seven between them. So it's no surprise that as the top's line offence dried up (those three have combined for two goals in the Sens' last four games), the wins have stopped coming for Ottawa--because no one has picked up the slack.

Take a look at some of these abysmal statistics for November, from the bottom nine forwards:

Only Kelly, Winchester, and Shannon can be said to be living up to expectations--and even so, just barely--while Alfredsson's better-looking numbers are still far off the pace fans (and likely coaches) would have expected from him. Ruutu's been absent from the scoresheet when it comes to goal-scoring, and hasn't even been particularly effective otherwise (with the possible exception of his penalty-killing).
Take a look at this chart, showing the dispersion of goal-scoring through the Senators lineup: 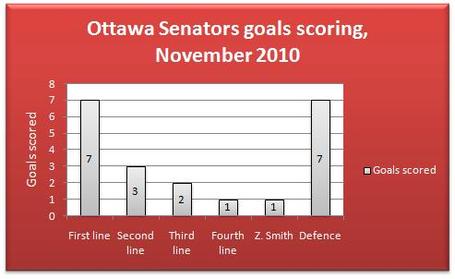 Not pretty. The defence corps--led by Sergei Gonchar (4G) and Erik Karlsson (2G)--have as many goals as the bottom nine forwards combined. Zack Smith played three games in November before being sent to Binghamton, and still has as many or more goals as eight of the bottom nine.

All this to make one fairly obvious point: The Ottawa Senators aren't scoring enough goals. The team is overly reliant on offence generated primarily by Jason Spezza. The third line, so reliable offensively to start the season (and especially in last year's playoffs), is virtually impotent.

As bad as the goaltending and defence have been (defensively speaking)--and they have been bad--the offence needs to get going, too. No time like the present, against a struggling Jaroslav Halak tonight.