It was another brutal night for the Senators. Even though they were shut out by the current best goaltender in hockey, the Senators beat themselves more than they were beaten by the Bruins. Boston played well, but the Senators practically gift-wrapped the game for them with the number of giveaways, defensive collapses, and basically everything Chris Phillips did (more on that later). Full marks to the Bruins for capitalizing on their chances.

Alright, let's get this over with, shall we?

Sens Nemesis: Tim Thomas
Thomas improved to 17-7 lifetime against the Senators, but the real story isn't his performance tonight, but rather his performance so far this season. Thomas finishes October a perfect 6-0 with three shutouts, a 0.50 GAA, and .984 save percentage. His defence definitely helped him out, but Thomas still made 29 saves and was extremely impressive during a first period blitz after the Bruins took a 1-0 lead.

Sens Killer: David Krejci
Goal, assist, and more or less played as a rover for most of the night. If the Senators were trying to regroup in their own zone, Krejci was hanging there with them. His positioning paid off on the Bruins' first goal, and he prevented more than one Ottawa breakout.

Sens Hero: Brian Elliott
Elliott's numbers weren't great (4 goals against, .840 save percentage), but his defence left him hung out to dry. He made some great saves but with absolutely zero help from anyone on his team, he can't (and shouldn't) be blamed for the outcome. With the number of breakaways, odd-man rushes, and Chris Phillips flubs, Elliott was given no chance to win.

Sens "Hero": Alex Kovalev
His play dipped as the game went on, but for the first half Kovalev was absolutely flying on the ice. He was going at the puck from every angle, seemingly cycling it all by himself early in the first period. Kovalev's effort level has been steadily improving over the last few games, and tonight he was one of the few bright spots on the team.

Sens Zero: Chris Phillips
Four and a half minutes in, Phillips attempted to make a pass to Mike Fisher in the defensive zone. Unfortunately for Phillips, Fisher had no idea the pass was coming and the puck bounced off his stick and onto David Krejci's. One slap shot later and the Senators are down 1-0. Phillips tried to make for it a few minutes later with some strong play in the offensive zone (no, really), but the Senators couldn't tie it up. Midway through the third period, Phillips found himself behind Boston's Jordan Caron, whose breakaway goal made the game 4-0. Not a good night for Phillips. He looked old and slow, and without him the Senators have little in the way of defensive-minded defencemen.

Sens Zero: Nick Foligno
A whole 30 seconds after Brian Elliott had stymied Nathan Horton on a Bruins 2-on-0 late in the second period, Nick Foligno attempted to deke around Boston's defenders and gave away the puck, leading to a Milan Lucic breakaway. The difference between the Horton and Lucic breakaways? Lucic scored. This shift is what sealed the deal on the game before the second period even ended.

Sens Minus Three: Daniel Alfredsson
That was his plus/minus rating for the night. Worst on the team. He was on the ice for every goal against. 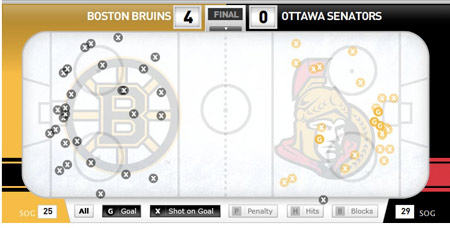