The legendary captain of this team...

Unfortunately, none of us can truly understand how awesome Alfie really is, but I will do my best to try and help you.  This is the man who became the face of the franchise.  The man who saved us from the wreckage of Alexei Yashin.  The man who bore the brunt of our wrath for playoff losses to the Toronto Maple Leafs.  He has taken everything the city can throw at him in stride, from his rookie year to this season's maddening start.  It is for this reason above all -- the way he handles the burden of the fans' love -- that we love him.

He is the man that can do this:

He is the man who did this:

Is it any wonder at all that a man who has made his whole career out of sheer force of will would get his thousandth point via the third goal of a hat trick?  You can try to dismiss it as an empty net goal, but Alfrdesson had to work for that goal, just as he had to work for his other two in the game.  A redirection of a Karlsson slapshot, fighting through two defenders to blast a shot through Ryan Miller, and finally battling for a loose puck and backhanding it in from near center ice.  But what else could you ever expect from the guy?  It's Alfie.  What else is there to say?

In researching for this article, I was surprised to find that many great forward thinkers throughout history seemed aware of the awesomeness that Alfredsson would bring to the world one day.  For instance, this quatrain by Nostradamus of all people:

The thousandth point comes on the two hundred ninety fifth day
The ungrateful bear witness to the unstoppable
The mortal world shall never again see the likeness of him
The time of Alfred's son has come to the Northern land.

Japanese master poet Masaoka Shiki composed this epic haiku about Alfredsson almost 121 years ago!  I had to translate it myself:

His rocket shot flies
like waterfalls of lava
Daniel Alfredsson

However, what was most fascinating to me was that the ancient Mayans apparently worshiped a god, Qectexoacatl, who bore a very striking resemblance to our current captain.  Look at this piece of recovered artwork recovered from Uxmal, known as "Arrival of Qectexoacatl": 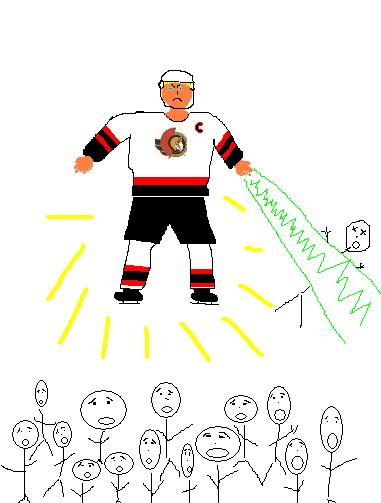 Apparently this piece depicts Qectexoacatl's arrival to the world.  From his left hand he destroys an unbeliever while the remaining unbelievers scatter in terror.  Notable is the depiction of the unbelievers as lesser beings (i.e. underdrawn), while Qectexoacatl is fully realized.  The yellow lights radiating from him are known as nimaläj, which loosely translates as "awesomeness." Most interesting, of course, is the well-publicized date of the end of the Mayan Calendar.  This date coincides with the "Departure of Qectexoacatl."  Is this a clue to Alfredsson's imminent retirement?

In the end, it's kind of amazing for me to think I have witnessed just about every point of Alfie's career.  We live in an era of pro sports where players are often forced to choose financial security over their love of the game.  Lifetime players for one team are rare these days, and to think Daniel Alfredsson will probably spend his whole career with the Ottawa Senators just makes me appreciate his latest milestone that much more.  He is the kind of player who makes it easy to be a Sens fan, and regardless of the outcome of this season -- or his career -- we should appreciate what we have in him -- because we won't have it for much longer.