The road strikes back: Senators lose ugly to Capitals, 5-2

Share All sharing options for: The road strikes back: Senators lose ugly to Capitals, 5-2

I wrote in the game day preview that the Senators could beat the Capitals if they played a good team game.  As the score indicates, that did not happen.  The game was close for a little while, but the difference was the Capitals' ability to punish the Senators for every mistake, while Ottawa could do nothing with their chances.  Case in point:  A late 3-on-1 for the Senators wound up with a shot right into the chest of goalie Jose Theodore, instead of the back of the net where it belonged.

What, you want more bad news?  Milan Michalek was injured -- he only played 1:58 in this game.  This means that Ottawa's top line is now completely shelved.  There was no update on what exactly was injured or how long he will be out, but we'll post an update as soon as we know anything.

The fact that this was not a complete team effort means there are some heroes and zeroes.  Read on for a look at tonight's mess.

Sens Heroes: Nick Foligno, Matt Carkner, Erik Karlsson
This game was a physical affair, and at times felt like a playoff game with the kind of tight checking both teams threw around all night.  That was the kind of game that let Nick Foligno shine.  Foligno worked the corners hard all night, went to the front of the net, battled for the puck, and showed some decent stick-handling skills as well.  He clearly does not shy away from contact and almost seemed to thrive on getting his nose dirty.  It was Foligno's hard work that directly led to Ottawa's first goal, as he fed the puck to Senators sniper Chris Phillips, who did the rest.

Carkner also seemed to enjoy the bodies being thrown around tonight.  That shouldn't surprise anyone, but I felt Carkner was the team's best defensemen tonight.  He was easily the most physical (surprising considering Volchenkov usually takes this title every night) of Ottawa's six defenders, but more importantly, he made good, quick decisions with the puck, and that was critical considering how vicious Washington's forecheck was all night.  He was also simply out-muscled by Alex Ovechkin for the Capitals' fifth goal, but there aren't many defensemen in the league capable of going one-on-one with that guy, and Carkner is on the third pairing, so we can't hold too much against him.

And of course, in a physical game you'd expect Erik Karlsson to be ineffective, right?  Wrong.  Karlsson rubbed out at least two people that I saw, and also made several great defensive plays.  Karlsson was even on the night while his partner, Kuba, was a minus one.  While I'm not sure where the goal difference came from tonight, I am sure that Karlsson was the better of the two tonight. That's bad.

Sens Zeroes: Pascal Leclaire
I hate to do this, because Leclaire was the reason the Senators were within one goal after two periods.  But he let in three soft goals tonight, including the backbreaker to make it 3-1 just 26 seconds into the third period.  Leclaire was maddeningly inconsistent tonight, making some incredible saves, and not making some pretty routine ones.  It is a sad fact that the team simply doesn't have the offensive firepower right now to support that kind of play.  That's not necessarily his fault, but he was expected to be the number one guy for a reason.  He has to steal a game here and there for the team while their scorers are out.  It hasn't happened yet.

Honorable Mention:  Jonathan Cheechoo, Peter Regin
Cheechoo had a good move for the team's second goal, and led them with five shots on goal.  He tried his hardest tonight.  That's all I ask of him.

Regin was a plus two on a night where his team gave up five goals.  That's pretty impressive.  Maybe Clouston should have matched him up against Nicklas Backstrom and Alex Ovechkin?

Sens Killers: Nicklas Backstrom, Alex Ovechkin
Well, there's not much to say.  The team did a pretty good job of containing Ovechkin, and he made them pay by setting up Backstrom all night.  Then he was double-shifted to get his own goal, which he did by beating Carkner as described above. 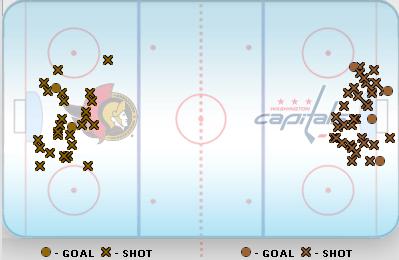 Yes, the Sens scoring chances were horrible.  No, the Caps did not score from behind the net.

Next game is Saturday at home against the Panthers.  This team needs a win.  Badly.