Share All sharing options for: Kovalev scores four as Senators win 7-4 over Flyers

The Ottawa Senators' 7-4 win over the Philadelphia Flyers had just about everything: Lots of goals, lots of shots, a couple goalie changes, a couple comebacks, penalties, a hat trick; just about the only thing it didn't have, and which continues to elude the Senators, is powerplay success. Even without it, though, the Senators came back from a 1-0 deficit to build a 4-1 lead, lost it, and then regained their three-goal lead, largely thanks to Alex Kovalev (with a special thanks to Brian Boucher and the Flyers' defence corps), and got two points in the end.

Sens heroes: Alex Kovalev, Anton Volchenkov, Mike Fisher, Ryan Shannon, the third line
Kovalev was on his best all night long: Four goals, an assist, six shots, and +5 in 18:47 TOI. It was a little surreal to see the reception he got, with some "KO-VEE" chants bursting out towards the end of the game, and he worked the crowd a bit with a 'moon-skate' celebration when given first-star honours (picture the moonwalk, but on skates). People are going to complain about his consistency, but it looks like there's an implicit understanding with Kovalev: You may not show up every night, but be there when you're needed. With Jason Spezza and Daniel Alfredsson out, he's needed, and he showed up tonight.

Volchenkov was his usual shut-down self, and particularly strong tonight, but also added in three assists to the offensive outburst tonight. With his +5 on the game, Volchenkov's tied for the team-lead in +/- with Fisher and Nick Foligno at +11. Considering the opponents he typically sets up against, it's a pretty remarkable statistic.

Although he only had one assist in the seven-goal game, Fisher played a significant role in the win. He was +4 on the night, but his biggest contribution was in the faceoff circle: 14-for-19 in the faceoff circle, good for 74 per cent on the afternoon. He completely dismantled Mike Richards on the dot, and at one point was so strong on the puck that he lifted Richards right off his feet and onto his face. Herculean faceoff effort.

Whoo... lots of heroes tonight. Ryan Shannon played like he's been playing the last few games, using his speed to really pressure opponents, and when the Senators took control in the first period, that was due in large part to the hard and fast forechecking by guys like Shannon on the Flyers' defence. It's amazing to see Shannon, so often undersized against just about any NHL defenceman, force opponents into mistakes just with his speed and a push here or there, and causes a turnover. It's how he had success last season, and looks to have found that stride again.

The third line, with Jarkko Ruutu, Chris Neil, and Chris Kelly, each deserve Hero status for their work in the game. Call them the most overpaid line in the league, if you will, but they earned their paycheques tonight. Kelly had his first multi-goal game with two goals, including a snipe job in the first, plus an assist, Ruutu rounded out Ottawa's scoring and had an assist, while Neil assisted on Ruutu's goal with a sweet little dangle around Braydon Coburn, and had seven hits on the night, too. Kelly gave the puck away and was directly responsible for Arron Asham's goal, granted, but he did alright for the most part.

Sens zeros: Chris Campoli, Filip Kuba, Pascal Leclaire, Milan Michalek
Campoli... what can you say. He was -3 on the night, soft on the puck, of limited effectiveness offensively, and just looked like an easy mark for the Flyers forwards. He was benched plenty in the latter part of the game for his mistakes, and it'd be a good bet to suppose he'll be scratched to get Alex Picard back in the lineup for next game.

As for Kuba, I'm not sure what it is. Maybe I'm looking for too much. Maybe I'm just not seeing what he's contributing to the team. But, even with his assist, I didn't see Kuba contributing much against Philly, and I haven't seen much from him for a few games now. He's supposed to be the calming veteran supplementing Erik Karlsson on their pairing, but often he looks as lost as his rookie partner does--and sometimes moreso. He's been soft on the puck, soft on the man, and non-committal, slow, and unsure in his decision-making. Basically, not good enough.

It's never good when you're team is winning and you get pulled, and Leclaire didn't look happy to see Brian Elliott gearing up after Asham's goal, while the score was still 4-3 for the Senators. After allowing three goals on ten shots, though, none of which was unstoppable, will get you pulled any time. It wasn't solely reflective of his play, though; coach Cory Clouston was almost certainly making the change because Ottawa had stopped playing with the drive they had in the first, and the move also served to wake the Sens up again.

Sens killers: Darroll Powe
For whatever reason, Powe seems to play well against the Senators. He's got 3G and 1A in 4GP all-time against the Senators, and his goal on Sunday turned the momentum in favour of Philadelphia to get them back into the game. He had a couple hits on the night, his line was pretty much the only one with good pressure on the Senators, and he was the Flyers' only centreman with a better than 50 per cent faceoff stat (he was 6-for-11, or 55 per cent).

Odd statistic: Intra-team +/- disparities
It's pretty amazing that, even though they're on the same team, Powe (+1) is a full eight +/- points ahead of team-worst Claude Giroux (-6) on the night. Just as amazing is the fact that there is a nine-point disparity between Kovalev (+5) and Campoli (-3). It's demonstrative of the differences of play between players on the same team that there can be such a huge difference in the same game. 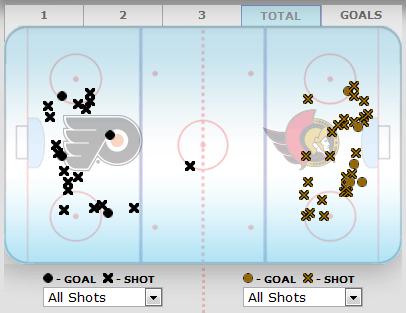