Senators squeak by Bruins with 2-1 victory

Share All sharing options for: Senators squeak by Bruins with 2-1 victory

Ottawa defeated Boston for the second time in six days, ending the season series at 2-2-2 (Ottawa suffered two 4-3 overtime losses) and though it wasn't a 5-1 win, it was still a quality victory.  Boston has been a tough opponent for the Sens over the past year, so it was good to see this team close out this year with a win.

It was a tight, physical game, and it was clear that Ottawa was missing Anton Volchenkov from early on.  The team was buoyed by the confidence of their winning streak, however.  They weathered the storm of Boston's hits well, and used their only powerplay to get some momentum.  Yes, it sounds unbelievable, but even though the team went 0 for 1 on the PP today, they fired off six shots.  Of those six, two were good scoring chances, with Jason Spezza getting a great shot from the slot and Alex Kovalev deciding to hit a post instead of an open net.  Most importantly, the chances gave the Senators some jump to their game and forced the Bruins to back off just a little bit.

That cushion was all the team would need as they used it to strike late in the first.  With just six seconds left, Bruins captain Zdeno Chara made the curious decision to fade away from Senators captain Daniel Alfredsson towards puck carrier Nick Foligno.  Foligno, seeing he had drawn both defensemen, made the smartest play he could: pass to Alfredsson.  Chara was not able to get back over in time, and the space allowed Alfredsson to skate out wide and cut in towards the net.  Tim Thomas was forced to move across to cover the angle change and the threat of Foligno driving the net and Alfredsson used the opportunity to sneak a wrist shot through the five-hole.

Spezza netted the game winner (more on that in a bit) and the team weathered a storm of shots in the third with a great defensive effort to hold on to the win.

(Heroes, Zeroes, and Killers after the jump.)

Sens Heroes:  Daniel Alfredsson, Jason Spezza, Brian Elliott
We just described Alfie's goal, and it was a thing of beauty.  He finishes the season series against Boston with six goals and one assist in five games.  He also has nine points (5G, 4A) since his return from injury.  There's no doubt what he means to the team, and it's laughable that he is not leading this NHL.com poll: 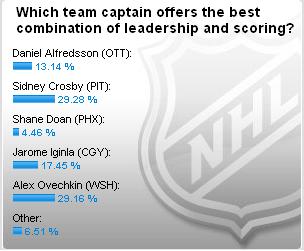 Meanwhile, Jason Spezza became the third player to score a goal in his return, following the lead of Alfredsson and Milan Michalek.  The pressure to continue the trend now falls on Volchenkov and Jesse Winchester.  Spezza netted the game winning goal off of a great feed from Alex Kovalev, who appeared to draw four Bruins to him.  Rather than try to dangle his way around the net, Kovalev simply threw a backhand pass to the trailing player, and Spezza wired it high stick side.  Tim Thomas had no chance.  This is one area where Spezza's presence has been missed.  In the twenty games he's missed, the trailing player in a developing play like that has been a defensemen like Chris Campoli, and Kovalev has elected to circle the net instead of passing.  Spezza is not Campoli, and Kovalev clearly trusted him to make the pass worthwhile.  He chose... wisely.

Brian Elliott gets mention not for the few great saves he made today, but for the way he bounced back.  Thinly foreshadowed Sens Killer Daniel Paille unleashed a hard knuckleball from a fairly sharp angle that Elliot should have had.  Instead, he whiffed it and let the Bruins tie the game at one all.  With Mike Brodeur fully healthy again and playing well before Elliott sabotaged him, a bad goal could have easily gotten into Elliott's head and weakened his play (and, by extension, his teammates' play) but that was not the case.  Elliott bounced back with a few good saves and the team's confidence did not sag.  When the confidence bubble bursts, this team will lose.

Nobody?  Really?  Are you a homer?  Yeah, I am a little bit, but I didn't feel that anyone deserved the distinction of being called out.  This was a different win than the one-goal victory over the Blues -- Ottawa needed a much more complete team game to pull this one off.  A true zero on the ice would have likely cost them two points today.  Filip Kuba was again the weakest defenseman, but even though he gave the Bruins their only power play of the game, I think it would be unfair to call him a zero, so I won't.

Worth Noting: Did you see Ottawa's new shutdown pair of Chris Phillips and Erik Karlsson?  Not having played together, they were slightly out of sync, but not at all out of place.  It was this pairing on the ice for the final shifts against Boston with their goalie pulled.  That's a lot of confidence in the rookie, but he's not doing anything to make Clouston doubt him.  Steady play of his partner (*cough* Kuba *cough!*) really seems to bring out the best in his game.   In addition, he showed off some offensive skill, dangling his way across the top of the circles to rip a shot that beat Thomas cleanly, only to ring off the post.  The Goalpost Kid strikes again.

Slow Down, Romeo: As my excellent high school English teacher, Mr. Gianforte, taught me, the primary flaw of everyone in William Shakespeare's Romeo & Juliet is that they are all trying to do way too much too quickly.  If everyone just slowed down, the play wouldn't have been a tragedy.  I felt that way about Peter Regin today.  Regin, as we all know, has been red hot recently, and he has been taking a beatingf rom other teams to accomplish it.  In this game, he played fancier than usual in the offensive zone, though he was his same stalwart defensive self in Ottawa's zone.  Still, if he had just slowed down a little bit, I think he could have had a more productive afternoon.

Interesting Stat:  Both teams had a goal called back today:  Mark Recchi for kicking it in and Mike Fisher for a high stick deflection.  The only way to keep Mike Fisher off the scoresheet is to call back his goals.  Or get him to propose to you.

Sens Killer: Daniel Paille
I'm so glad I don't have to write Tim Thomas here.  Paille was the best player on the ice this afternoon, and that's saying a lot considering how good Alfredsson was.  He was flying out there and though he got a little help from Elliott for his goal, he definitely earned it.  Ottawa was quite lucky the rest of Boston didn't have the same intensity or it might have been a different outcome.

Man, that was a long recap for a 2-1 game.  Congratulations if you read it all.  Now go outside.

Next game is Tuesday against New Jersey.  It will be a great test for the Senators, who hope to increase their season-high win streak to seven.  See you there!