This was a pattern we had seen many times:  Outshoot the other team, outchance the other team, lose the game when they bury their chances while you don't.  Only this time, Ottawa was the team that buried their chances while Chicago failed to convert some glorious opportunities.  That was all it took, as the Senators jumped out to a 2-0 lead and never looked back.  Despite constant pressure in their own zone (Ottawa only managed 18 shots, and no more than seven in any period), the team did not appear panicked at any point, and didn't look like they had just played the previous night.

It's undeniable at this point that the Senators have looked like a different team since captain Daniel Alfredsson returned.  Though he was held pointless tonight, his impact to the team was still quantifiable.  This team plays with confidence when he is in the lineup, and it shows most in the penalty killing.  Ottawa has not allowed a powerplay goal since Alfredsson's return, killing 13 of 13 opportunities and scoring shorthanded  (Zach Smith's first career goal, created by Alfredsson's heads up play) in that same span.  Meanwhile, Mike Fisher has two goals and four assists since his return -- just the slightest release of pressure and he is producing again.

Most importantly, the players are feeding off each others' confidence. Nowhere was that more evident than in goal tonight.  Brian Elliott was spectacular in this game.  It was almost like he watched tape of Mike Brodeur and simply started playing simple angles and not giving up rebounds.  Oh, and a little luck helps, too.  Read on to see what we mean...

Sens Hero: Brian Elliott
No exaggeration to say he was outstanding tonight.  As a matter of fact, I'm not even going to try to describe his play, I'm simply going to let this save do all the talking:

Sens Hero: Cory Clouston
The head coach deserves some credit for tonight's game.  Everyone knew what the Chicago Blackhawks were capable of coming into the game.  It was not going to be the same as playing Montreal or an injury-depleted Boston Bruins team -- the opponent tonight was tied for the overall lead in points.  They were loaded with offensive firepower and fast, strong, puck-moving defensemen.  Ottawa was still missing two thirds of its top line and its best goaltender (whether that was Leclaire or Not Martin is debatable in the comments section) and completely outmatched on paper.

And yet, we saw a team that limited their opponents' shots to the outside, generated turnovers in the neutral zone, and simply executed their game better than the other guys did.  As mentioned before, this was coming off a game the previous day.  This is trend that dates back to the beginning of the team's win streak.  Clouston has made some adjustments and the team has bought in.

Sens Hero: Erik Karlsson
Karlsson's confidence is improving every game, at a noticeable pace.  He picked up a point setting up Mike Fisher's powerplay goal late in the game, and was noticeably determined in his own end, repeatedly breaking up plays in front of his own net before they had a chance to develop.  He threw his body around, fearlessly hitting guys bigger than himself, and continued to snap long passes onto the tape of of his teammates' sticks.  The future looks bright for him.

Did you say powerplay goal?  Yes, I did.  If you're counting, that makes two in two games.  That's called a streak.  Pretty awesome, huh?

Sens Hero: Peter Regin
Speaking of young talent who are developing nicely, Regin was Ottawa's best forward tonight.  Owner of a sweet goal and an assist tonight, Regin also played the intelligent defensive game that got him on the team out of training camp.   His play has earned him more minutes as this season progresses and that can only be good for the coach and his teammates.  If Ottawa can roll four lines, they have an advantage most nights.  Regin's emergence gives the team four centers, and Clouston may well have enough bodies when Spezza and Michalek return to create three lines that are legitimately playable in all circumstances.  That's huge, folks.

Sens Killer: Marian Hossa
Hossa came to play tonight, ripping shot after shot -- only four made it to the net -- and generally skating like a madman.  Elliott had no chance on Hossa's breakaway shorthanded (thanks, Campoli) goal.  I like Elliott's glove hand and I think he has a decent chance in most one-on-one situations, but he could have had six arms and would have had no chance of stopping Hossa's shot.  Hossa reminds you what a pure goal-scorer really looks like:  sometimes they just put their heads down and decide to score, and there's nothing you can do about it.

No Sens Zeroes?  Nope.  Kuba took a bad penalty early in the third that could have let Chicago back in the game, but his teammates -- primarily Anton Volchenkov with some timely shot blocks -- bailed him out.  I felt the team needed mistake-free play from all their defensemen to have a chance of winning this game, and for the most part, they got it.  Kudos to the players and Clouston for their preparation.

Sens Hero: Chris Neil
Not only did he look like the Tasmanian Devil out there tonight laying video game hits that were dropping guys left and right, he also collected two assists, neither of them flukes.  It was a physical game and that suited him just fine.  Neil did the dirty work, even got some powerplay time, and gave the team some much needed grit against a formidable Western Conference opponent.

This shot chart does not impress Hasse: 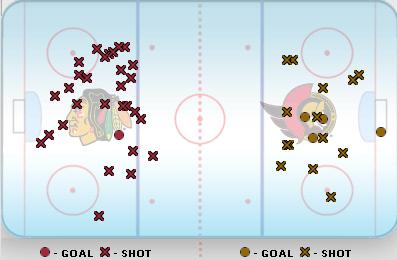 Next game is Thursday against St. Louis.  Hello, trap game!