Share All sharing options for: Alfredsson powers Senators to 4-2 win over Canadiens

It's amazing to watch a player come back after an 11-game absence due to a shoulder injury, and immediately make an impact to--let's be honest here--drive his team to the win, and that's what happened Saturday when the Ottawa Senators won 4-2 over the Montreal Canadiens. No one around here would question Daniel Alfredsson's incredibly significant role in this team's success (the team's record with and without him tells that story), but against Montreal he looked almost superhuman. He created the first goal, scored the second, and assisted on the third--the game winner--and, thanks also to some strong goaltending once again from Mike Brodeur--gave the Senators what they needed to win.

Sens heroes: Daniel Alfredsson, Mike Brodeur, Chris Phillips
Alfredsson (aka Thor) made an immediate impact in the game statistically speaking, when he turned the puck over to set Zack Smith up for a short-handed goal. More than his offensive impact, though, was the obvious effect his return had on his teammates, emotionally speaking. The team executed their game plan with confidence, with Alfredsson as the flag-bearer. The fact that he returned only three and a half weeks after a shoulder injury which was initially expected to keep him out for four to six demonstrates to his teammates the kind of perseverance needed to win in the league, and that he had a goal and two assists underlined that.

As much as we will all try to keep our expectations in check with regards to Not Martin, how can we not get excited after his play on Saturday? I'm not going to suggest he's the Senators' solution in goal, but there was something different about Not Martin's game: He allowed a weak goal, but then bounced back and didn't allow another one, and his teammates responded to that weak goal quickly. Amazingly, Not Martin's now got a GAA of 1.00 and a SP of .966 in his three starts so far this season, and don't be surprised if he gets the lion's share of starts while Pascal Leclaire gets over his concussion.

One defence, Phillips has to get some credit tonight. Although Montreal's offence isn't the most potent he has or will face(d) this season, he effectively shut them down, and scored the game-winning goal thanks to some good puck recovery by winger Alex Kovalev. He was also the chief penalty killer, playing a huge part in the Senators' ability to keep the league's top powerplay off the scoresheet despite six opportunities with the man-advantage.

First and foremost: Zack Smith
Must have been exciting for Smith to score his first NHL goal against the Habs, and it wasn't an easy one, either: Short-handed, and a well-placed shot high stick-side over Carey Price's shoulder. Even though it was just his sixth NHL game, Smith has been picking up some serious penalty-killing time in Jesse Winchester's absence, and he (and the whole PK unit) has been playing well. Smith played 11:21 total on Saturday, 4:09 of which was while short-handed.

Missing out of action: Filip Kuba
Not sure how Kuba, diagnosed with an "upper-body" injury (which was originally tabbed as a wrist problem), doesn't return to the lineup on the night Alfredsson comes back. Not to question the seriousness of his injury, but he had been expected to return Saturday, while Alfredsson was doubtful, upgraded to questionable, upgraded to possible, upgraded to probable, and then positive. 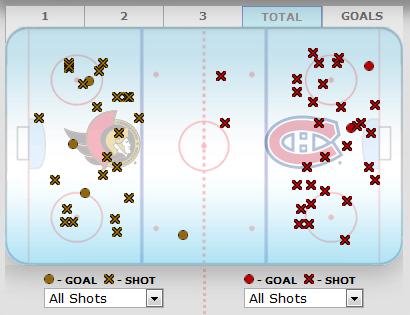