Share All sharing options for: Senators earn 2-0 win over Rangers

Sens Hero: Mike "Not Martin" Brodeur
32 saves for a shutout in his second start.  His stats now stand at: 2-0-0, 0.50, 0.982, 1 SO.  That, my friends, is spectacular.  And while two games is a extremely small sample size, there's not much doubt that he is Ottawa's best goalie right now.  It's amazing to see the difference in the team -- just a little confidence and suddenly it didn't matter how many players were injured.  Brodeur was not outstanding in this game (that honor goes to Lundqvist), but he did not have to be.  All he did was make the saves he needed to make, and his team did the rest in front of him.  I'll say it again: he gave this team confidence and that's what the Senators needed in a desperate way.

That's right, we started off with a hero, because he deserves it.

Ottawa truly earned the win tonight, taking the play to the Rangers from the start of the game, at one point outshooting them 12-4 in the first.  New York hung around thanks to their goalie, and it was easy to start to worry that this game would have the same outcome as the Carolina game, but this time it was not to be.  There was no dropoff in intensity for the Senators in this game.  They played as a team tonight.

The team overcame two good Rangers powerplays and continually bounced back from everything that was thrown at them.  Chris Phillips and Anton Volchenkov shut down Marian Gaborik, but the story of this game was the goaltenders.  Ottawa controlled the action for most of the night, and the longer there was no score, the more obvious it was the next goal would win.  That goal came from a great feed by Alex Kovalev to...

Sens Hero: Chris Campoli
20:19 of ice time.  Two shots on goal, one resulting in the game winner.  Great defensive play all night.  Games like this are frustrating in a sense, because you see what Campoli can be, but he doesn't get there consistently.  When he does, he's fun to watch.  Campoli is a bit of a gambler -- of all the Senators' defensemen he is most apt to pinch, but tonight his instincts paid off as he just started creeping up the ice.  Mike Fisher fed the puck to Alex Kovalev, who quickly saw the uncovered D-man and put a pass right on the tape.  Campoli was then able to walk in a little closer, and fired a wrister high stick side on Lundqvist.  It was a great shot choice, because nothing was getting through his glove tonight.

Sens Hero: Erik Karlsson
PING! Karlsson ripped a shot off the post -- one of the few that beat Lundqvist cleanly -- and he was as confident as I've seen him in a long time.  He still had a few mistakes, and that's to be expected considering he's still a rookie, but it's not a coincidence that Campoli was able to play as aggressively as he did.  His partner consistently made good decisions, and that's the most encouraging thing we can see out of a rookie defensemen.  We know he has the shot.  We know he has the vision.  Now all that matters is the learning curve, and it looks like it's progressing well.

Here's a little bad news breakdown from our own Peter Raaymakers:

Misrepresentative stat of the night: NYR won 70 per cent of faceoffs

The team really dodged a bullet with this one.  Every time the Rangers came up with the puck, there was a Senator there to come up with a takeaway.  That's not going to happen every night, so this is a stat that must improve.

Sens Hero: Matt Carkner
Carks deserves a shout out for beating the crap out of Donald Brashear not once, but twice.  Both of these fights came early in the first and set the tone for the team.  While I didn't like him taking ten minutes' worth of penalties, he didn't back down and neither did his teammates.

Sens Killers: Henrik Lundqvist, Chris Drury
Yes, there were some.  Primarily Lundqvist who made Tim Thomasesque saves tonight.  This could have easily been a lopsided Sens win, but New York's goalie gave them every chance he could.  They weren't able to get him the goal support he needed.  Sens fans should be able to relate.

Meanwhile, Drury was the Rangers' best player not named Lundqvist.  He drew a (questionable) penalty by splitting defenders, tied for the team lead with five shots on goal, and as noted above, absolutely dominated in the faceoff circle.  He was flying out there, and benefited from the attention Gaborik got.  It was a testament to the Senators' team play that he did not score tonight.

Sens Hero: Peter Regin
Even though he was held without a point tonight, Regin was easily Ottawa's best player.  He was fearless in the offensive zone and gritty in the defensive zone.  His smart play and hard-charging attitude reminds me a little -- just a little -- of another European rookie who turned out to be pretty good for this team.  No, not Jani Hurme.

YOU CAN'T HANDLE THE SHOT CHART: 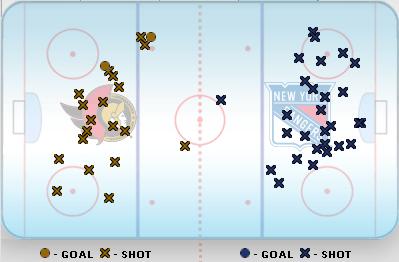 What a huge win for this team.  Look for them to carry that momentum into Saturday's game against Montreal in a monstrous game -- both teams will go into that game tied in the standings.