Share All sharing options for: Senators lose 6-1 in ugly affair against Thrashers

Here's the game in a nutshell: The Ottawa Senators were in tough anyway. The Atlanta Thrashers scored early to set Ottawa back. The Senators did nothing on a five-minute powerplay, but managed to tie the game mid-way through the first. The Atlanta scored a couple, at least one of which was suspect, and chased Pascal Leclaire. When Brian Elliott came in for the second, he did no better, and the Senators ended up on the wrong side of a 6-1 score. So we continue to hope things will change when this team gets healthy again.

Sens heroes: Peter Regin, Jonathan Cheechoo, Erik Karlsson
Regin was the Senators' best player tonight, without question. He had Ottawa's lone goal, led the team with six shots, finished even in +/-, and was buzzing. The coach called him out today, and suggested that whether or not it was fair, the Senators were putting a lot of pressure on Regin to play a significant role in the team's offence despite being in his rookie season, and tonight at least Regin didn't disappoint.

There was little the Senators could be content with in the loss, but Cheechoo's hard work was one thing in which we can take some satisfaction. Even though he only had one shot on net, he was doing the things the whole team needs to do to keep getting chances: Skate hard (or as hard as you can), get the puck, work it around the zone, and drive to the net. He should have potted a great scoring chance late in the game and didn't, but his game was still good.

Finally, Karlsson may have been Ottawa's best defenceman tonight. He was fourth on the team in ice time tonight with 19:13 played, was one of only five Senators who weren't minuses, had a couple of shots, and had a very solid hit on Evander Kane late in the game. He miscalculated when left high and dry by teammates for Todd White's goal, but with three players to check, there was little he could do in that situation. The team may be falling apart, but the much-lauded confidence Karlsson was supposed to have appears to render him invulnerable to the same problems.

Sens zero: Alex Kovalev
Kovalev led the Senators forwards in ice time tonight with 18:54 TOI, but had zero shots. He had 3:39 in powerplay time, and even got a bit of PK time in there, too. But he looked downright lazy and uninspired tonight, in a game where his team needed a spark badly. There's little else to say: He did not have a single shot all game. Did the rabid Thrashers defenders shut him down that effectively? Nope. He just wasn't willing to bring it.

Sens killers: Powerplay inefficiency, goaltending inconsistency
No big surprise, but the powerplay didn't get better when the Senators lost their best players. Still, with a five-minute powerplay mere minutes into the game, you'd hope the team would generate some momentum, if not some palpable offence. The Senators only managed to get two shots during the five-minute man advantage, though, and didn't carry much forward from it.

I guess, at this point, we don't need to call it goaltending inconsistency. Ottawa's goaltending hasn't been inconsistent. It's been bad. Both Pascal Leclaire and Brian Elliott were guilty of allowing weak shots past them at times when they were called upon to carry their team along. I'm positive it's mostly a lack of confidence, and it can be corrected, but that doesn't make it any easier to watch.

Common refrain: Can't capitalize
Cory Clouston has been saying it for a while, and I've noticed it to: When the Senators get scoring chances, they can't finish them. When their opponents get opportunities, they almost always end up in the back of the net. 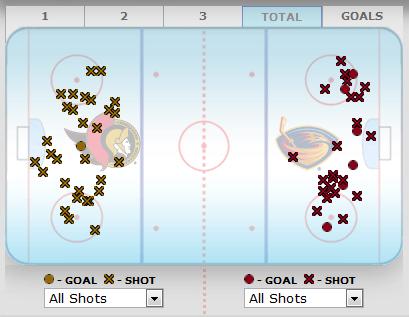