Share All sharing options for: Shorthanded Senators lose 4-1 to Hurricanes

Without three of their top scoring forwards and their top-scoring defenceman, and less than 24 hours to recover from their last game, it's hard to fault the Ottawa Senators for failing to come out of Raleigh with any points after an afternoon game against the Carolina Hurricanes. Still, some good effort kept Ottawa in the game, but without the finishing touch to get more goals past Cam Ward, the Senators came up on the losing end of a 4-1 score.

Sens heroes: Jonathan Cheechoo, Anton Volchenkov, Chris Neil, Erik Karlsson
One assist, but more than that, Cheechoo was working hard tonight trying to generate chances. He finished with just over 15 minutes in ice time, had a couple of shots on net and a couple of hits, and was part of a few of the Senators' good scoring chances.

On the defensive end, Volchenkov can always be looked to for leadership. He was -1, but had a solid assist on Ottawa's only goal, and had five hits. Good game for the guy.

Similar to Volchenkov, Neil brought it physically tonight, with six hits, including some big ones on the forecheck. He had a shot on net, and was good pressuring the 'Canes, too.

I was surprised to find out afterwards, too, but rookie Erik Karlsson was the Sens' leader in ice time tonight with 22:13 on ice, over 20 of which were even-strength. He had three shots on net, plus a few that were blocked or went wide. He wasn't on the ice for any goals, for or against, but helped generate scoring chances and has obviously improved his physical play of late, particularly using his body to edge out opposing forwards.

Sens zero: Killer instinct
Rather than singling out an individual for failing the Senators, I'll focus on one very costly fact: The Senators seem to have no problem working hard enough to earn scoring chances, but no one has the skill to step up and finish those chances off. Today, it was most evident in the first period, when the Sens outshot the Canes 16-5, but couldn't get one past Ward. With the names that Ottawa has in the lineup, it's not going to be easy, and without scoring depth the opposing checkers are able to focus almost solely on Alex Kovalev and Mike Fisher, limiting the ability of those two. Who knows how this team is going to get through the injury problems, though, and whether they'll still be in the hunt when they're over is anyone's guess.

Sens killers: Brandon Sutter, Eric Staal, Cam Ward
Sutter had one assist on the night, but played very well for the Hurricanes. He had that assist on a well-played 2-on-1, plus four shots and a hit. He looks like he should make a solid part of the Hurricanes future, which is about all that team has going for them (this afternoon's win notwithstanding).

Somehow, Staal was an animal on the ice, despite personal tragedy and little to no sleep while travelling around the continent over the last couple of days. He had a goal, but even before he got that, it was evident that his leadership was a huge part of what kept Carolina pushing even after going down early in the second period.

Cam Ward wasn't outstanding, and certainly didn't have to steal this game for the 'Canes, but he was solid when they needed him--especially in the first period, when Carolina was completely manhandled by the Senators. He made some solid saves later on to preserve the one-goal lead for his team, and then his teammates broke it open late in the third.

Final thoughts:
Tough game, but the Senators have two options right now: Find a way to score goals, or shut games down completely to win low-scoring affairs. They don't have the offensive depth to get the first done, and don't have the defensive abilities to do the latter. I don't envy Cory Clouston, Bryan Murray, or any of the players right now. 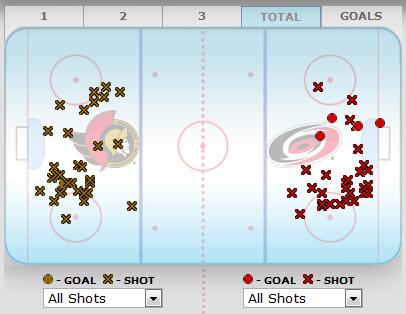