Share All sharing options for: Senators squeak by Islanders in 3-2 shootout victory

Those of you watching the World Juniors may be surprised to know there was an Ottawa Senators game played tonight.

First, the good news:
Ottawa’s secondary scoring has come on in a big way in the past few games and tonight was no different.  Goals by Kelly and Regin tonight were set up by Neil and, well, Regin respectively.  Here are some stats since Alfredsson has been injured:

That’s eleven points in four games for those players.  Chris Kelly and Nick Foligno have each contributed a goal in the last two games as well.  It is extremely encouraging to see these players raise their level of effort while the team’s leaders are shelved with injury.

Ryan Shannon has been Ottawa’s best player since Alfredsson was injured and that trend continued tonight as Shannon simply refused to be moved off of the puck without a significant battle, one which most of the Islanders weren’t willing to get into.  He looked fantastic on a line with Mike Fisher and Alex Kovalev.  Neither of those players had as good a night as Shannon, though Kovalev continued to generate scoring chances for his linemates.  This line also comprised the first three shooters for the Senators, and all three players scored with enjoyable moves.  Though he doesn’t get any credit on the scoresheet, it was Shannon who scored the game winner and he deserved it -- as he again simply refused to be denied and made one more move than Islanders goalie Dwayne Roloson could cover.

Kovalev-Fisher-Shannon wasn’t even Ottawa’s best line.  That honor went to Ruutu-Kelly-Neil, as these guys were flying all over the ice. Each of the three were hitting, playing strong defense in their own zone, and most importantly, driving to the net.  Kelly’s goal came off a point-blank rebound that Neil simply tried to blast through Roloson.

Anton Volchenkov also deserves mention as he was more Volchenkovian than usual, playing 24:42 of total ice time with one shot on goal and three destructive hits.  He was in pure shutdown mode tonight, and reaffirmed why he must be re-signed by this team.

Matt Carkner also did something this team has needed for a long time: he stood up for his teammates.  After Tim Jackman took a blatant cheap shot on Chris Campoli after the end of the first, Carkner jumped him immediately and caved his face in before the referees could separate the two.  Jackman was hospitalized after the game due to his sinuses filling with blood, but thankfully he is reported to be all right.  Hopefully he thinks twice in the future about running our players.

Now, the bad news:
Ottawa’s power play is bottom five in the NHL, and deservedly so.  They are terrible.  This is one area where Spezza and Alfredsson are missed the most.  Kovalev is relied upon to generate all the chances, and he just can’t do it by himself.  Erik Karlsson has superior vision, but is not ready to be a power play quarterback yet.  Karlsson does have a deceptively hard shot, as he caught Roloson totally unaware, blasting one that the goalie simply could not control due to its velocity.  Expect to see more traffic in front of the net, probably in the form of Chris Neil, from this team on the power play soon.  They just don’t have the talent to score on the power play any other way.

Pascal Leclaire let in another shaky goal, moving off of the post for no apparent reason.  Jon Sim simply took advantage of the opening and forced the puck through, tying the game early in the third.  Leclaire has shown he has elite skills, but he clearly still needs playing time.  That’s the only way he is going to add consistency to his game.  It should be mentioned that he looked very confident tonight, making some great saves and challenging shooters from outside his crease, which was awesome to see.  He just needs to eliminate the gaffes from his game.

Sens Killer:
Dwayne Roloson made a ton of outstanding saves tonight to keep the game from being blown wide open.  He gave his team a chance to win it, but they could not give him the goal support he needed.  The Islanders’ point in this game is the result of their goalie’s efforts.

Sour Grapes:
Speaking of Roloson, he had this quote to offer about Regin’s goal:

"It was a goal-mouth scramble, and that’s what the Sens like to do.  I watched the game last night and there were probably about five goaltender interference calls that could have been called, but it’s part of their game and that’s the way they do it."

For the record, there was one goaltender interference call in last night’s game, when Craig Anderson tripped Mike Fisher.  Roloson must have been feeling sensitive.

Let’s wrap it up with a shot chart… OF TOTAL DEVASTATION! 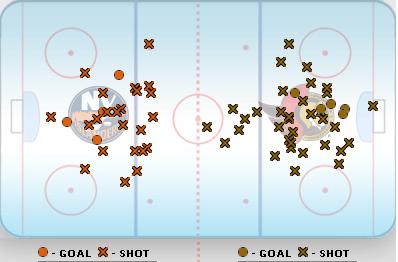 Ottawa’s record at the halfway point stands at 21-16-4, good for 46 points and sixth place in the East – much better than last year.