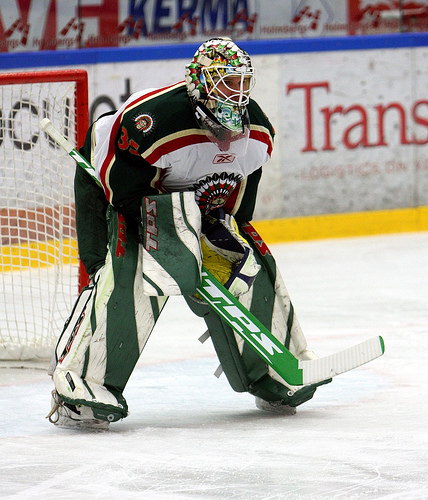 The Ottawa Senators won their opening game of the Toronto Maple Leafs-hosted Kitchener Rookie Tournament against the Pittsburgh Penguins last night by a score of 4-1, in large part thanks to goaltender Robin Lehner.

Lehner, drafted in the second round (46 overall) of the 2009 NHL Entry Draft, stopped 40 of 41 shots en route to the victory. He's the youngest player on the Sens' rookie squad roster at 18 years and just over one month. Geoff Kinrade scored the opener for Ottawa while Keegan Dansereau scored two goals (including an empty-netter) and defenceman Erik Karlsson scored a power-play goal off a slapshot from the point. Karlsson also had an assist.

I didn't get to see the whole game, but despite being outshot 41-28, the Senators looked dominant at times. An abundance of penalties, against Pittsburgh for most of the first half and Ottawa for most of the second, kept either team from establishing much flow, as did the five fights in the third period. Zack Smith, who was the final cut from the Sens' training camp last season and is captain of the rookie squad, got the decision in the best bout of the game.

Dansereau seems to be making waves so far in the tournament, and don't be surprised if his amateur tryout works itself into at least an AHL deal--and maybe a two-way contract and an invitation to the Sens' main camp. He's got a knack for finding openings to put the puck in, and the strength to make space for himself.

A lot of the eyes were on Karlsson, and all the powerplays gave hi ma good opportunity to show off his puck-moving skills. He had a good shot, and scored a goal because of it, but could probably stand to work on his accuracy; I wouldn't want to stand in front of the net when he's shooting. His speed certainly became a factor when he jumped into rushes, but his lack of size didn't seem to negatively affect him.

A couple other defencemen looked good, too. Obviously Kinrade, who scored the Sens' first goal and got plenty of powerplay time. Kyle Wharton's name kept coming up; it didn't hurt that he was on the top pairing with Karlsson. And Craig Schira looked solid, too.

The game was televised on Rogers 22, and it was a pretty good feed, too. For those of you in the Ottawa area, you should be able to catch the second game on Thursday at 7:00 p.m., also on Rogers.