Zubov looking for a trade after another AHL demotion

Share All sharing options for: Zubov looking for a trade after another AHL demotion 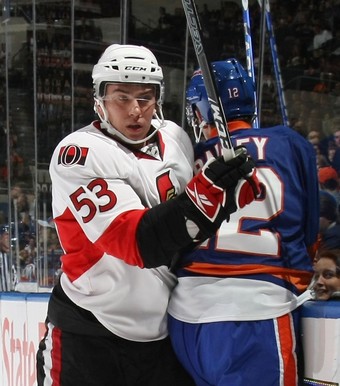 Ottawa Senators prospect Ilya Zubov, after being assigned to the AHL's Binghamton Senators for the third consecutive season, is pulling an Alexei Kaigorodov Alexander Nikulin Dany Heatley in requesting a trade out of dissatisfaction with his role on the team, according to Michael Sharp's B-Sens blog.

"I'm not very happy about it, it's not what I want. Both me and the Ottawa team [talked] and I might get traded soon."

--Zubov, on being demoted to Binghamton, courtesy Fox 40 News

Difference between Zubov and Heatley, though, is that Heatley was given everything he asked for--contract term, money, job security, leadership role--but still wasn't happy. Although Zubov has no one to blame for his situation but himself (he's been outplayed on the roster by Zack Smith, Ryan Shannon, Nick Foligno, Peter Regin, and possibly more), he does deserve an opportunity to play for another organization if it means a shot at the NHL.

And Zubov's far from the first Senators prospect to demand a trade in similar fashion.

In November of last season, SputNik (Alexander Nikulin) refused to report to Binghamton after his demotion, and was about to head to the KHL in Russia before being traded to the Phoenix Coyotes in return for defenceman Drew Fata in November of 2008.

Earlier that year, Brad Isbister (hardly a prospect, but whatever) exercised an out-clause built into his two-way contract with the Senators on being demoted to the AHL, and took an offer from a European squad to play there.

The season before, after playing six games in Ottawa before being sent to Binghamton, Kaigorodov left the team and went to Russia out of disappointment. In January of 2007, he was traded to--you guessed it--Phoenix, in exchange for Mike Comrie.

Zubov seemed like he was different than Nikulin or Kaigorodov, and for his first two seasons in Bingo he seemed to say all the right things. Then again, Nikulin seemed like a committed player when he kept a blog of his experiences in the AHL. Say this about Zubov, he's asked to be traded, but has not yet threatened to go to Russia--even though he could quite possibly earn hundreds of thousands of dollars if he returned to play in the Kontinental Hockey League. That could still happen, and even if it does, I wouldn't blame Zubov for doing so.

If he's traded, who's got their money on Phoenix as the trading partner?