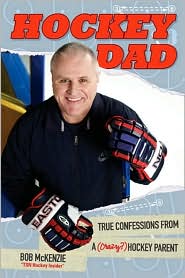 I don't know why I even bothered reading Bob McKenzie's Hockey Dad: True Confessions of a (Crazy?) Hockey Parent: I've heard it all before. Stories about crazy parents? Yeah, I've heard those -- while out of town on a tournament, my dad paid a bunch of kids 25 cents each if they would pound on the glass and cheer when my brother's team hit the ice. Tales of fiercely competitive 12 year olds? Pfft, that's nothing - I was splitting goaltending on a peewee team and the other keeper threatened to cut off my legs if I didn't tell the coach I was too sick to start the tournament (for the record, I called his bluff and started). Cautionary tales about concussions? My brother's had more than he can count - come to think of it, his inability to count these may be attributed to his concussions.
Despite having some wild hockey stories of my own, it's always good to be able to hear a few more. McKenzie (of TSN Hockey Insider fame) has some doozies - perhaps the most popular of which is when he called two stick measurements during an atoms game - but there's more than just hockey-related shenanigans to be found here. Underlying the ridiculous tales of hockey parents (or players) gone awry is a very deep passion for the game at all levels, most notably minor hockey. This isn't Bob bragging about his connections or his kids' hockey skills (he constantly brings up his oldest son Mike's less than stellar skating), this is Bob showing his vast array of experiences with minor hockey, and trying to help future hockey parents from making the same mistakes he has made or witnessed.
Perhaps the highlight of reading Hockey Dad is not any particular story within it, but the uncanny ability of the book to draw your attention to just how much effort your parents put into minor league sports. After nearly every chapter of the book, I'd start to think about a moment in my childhood where my parents, like Bob, sacrificed an unholy amount of time simply so that their children could enjoy minor league sports. There are four kids in my family, and we all played multiple sports, including plenty of hockey. My oldest brother played AA rep hockey and my parents drove him on all kinds of road trips. I played on a regional soccer select team that featured many out-of-town practices. We also reffed or umpired sports. You think that's a full workload for the parents? Add in years spent coaching soccer and volunteering as league organizer for hockey referees. That's commitment to minor league sports if I've ever seen it. I'd never really thought about how much time and effort my parents put into sports, but Hockey Dad is the kind of book that forces one to consider such experiences.
If you're looking for a close look at what it's like to be have a Blackberry loaded with phone numbers of hockey players, scouts, agents, and GMs, you'll have to hope Bob puts out another book, because this one doesn't cover that. However, if you want an entertaining, funny, and honest book about minor league hockey and the people within it, you're unlikely to find a better one than Hockey Dad. Highly recommended for those who have been through the experience, or those who have a kid that is going through it right now. I bought this copy for my father, a man who has seen it all in minor hockey, and will undoubtedly love every page.