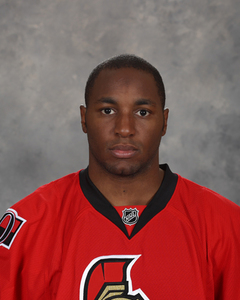 via binghamtonsenators.com.ismmedia.com, used without permission

Greg Mauldin, the 2008-09 MVP of the Binghamton Senators, has moved on from the organization and signed with the New York Islanders' AHL affilaite Bridgeport Sound Tigers, according to Newsday.com (via Sharp on the Sens).

Mauldin had a career high in goals (24), assists (27), points (51), and games played (80) in the 08-09 season, finishing second in team scoring, just one point behind Ilya Zubov. He was the only B-Sen to appear in all 80 regular-season games, a lone standby in a B-Sens season which was riddled with injuries and callups to the NHL, and as a result was named the team's most valuable player for the season.

Not sure what this means for Bingo, other than the fact that they'll be losing a veteran of six AHL seasons. It's not likely easy for fans of the team to see a player like Mauldin go, but at least it's couched with the fact that his moving on was likely to make room for the upcoming Ottawa Senators prospects joining the organization, such as James O'Brien and Erik Condra.