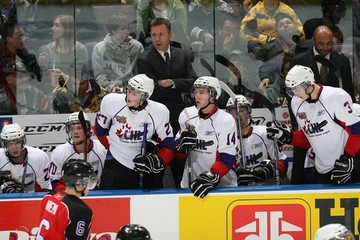 via www3.pictures.gi.zimbio.com, used without permission

It wouldn't be an Ottawa Senators off-season without hiring a new head coach. There's a bit of a twist on this third consecutive summer with a head coach hiring, though; this time the successful candidate will be working for the AHL's Binghamton Senators. His name is Don Nachbaur, a veteran of eight seasons and 223 games in the NHL, and he's been charged with the assignment of getting Bingo into the AHL playoffs for the first time since 2004-05.

His coaching career has lasted 13 seasons, including two as an assistant coach with the Philadelphia Phantoms and the other 11 in the WHL with the Seattle Thunderbirds and, most recently, the Tri-City Americans. According to the Sens' official press release, he's won two WHL Coach of the Year awards, in 1994-95 and 2005-06.

The B-Sens have been pretty much re-built in the past few seasons, with the Senators organization focussing on retaining and maximizing draft picks as well as signing free agents for their minor-league affiliate. With recent signings including forwards Ryan Keller, Martin St. Pierre, defenceman Geoff Kinrade, and goaltender Mike Brodeur, plus prospects including forward Jim O'Brien and defenceman Erik Condra and Erik Karlsson apparently ready  to join the squad, there's plenty of optimism in Binghamton for the upcoming season.