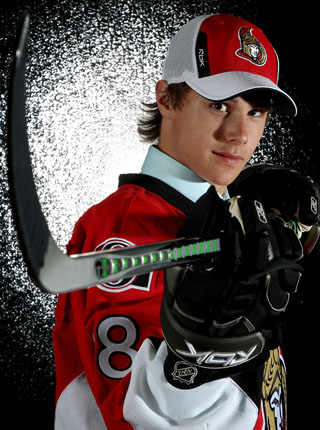 via cdn.nhl.com, used without permission

Looks like the Toronto Maple Leafs will be hosting a rookie tournament in Kitchener this September, and the Ottawa Senators, Boston Bruins, and Pittsburgh Penguins will all be sending their rookies to compete for... well... bragging rights, I guess.

Tournament starts Sept. 6, 2009 with a match between the Leafs and Pens, and continues for the next few days with seven games in total (for some reason Toronto and Pittsburgh play an extra game against one another). Here's the full schedule, from the Kitchener Auditorium's website:

Unclear at the moment which Senators will be at the tournament, but expect some of the prospects from the Senators' rookie camp with at least a fighting chance to make the big club or Bingo to play (Erik Karlsson, Peter Regin, Ilya Zubov, Patrick Wiercioch, Jared Cowen, Craig Schira, Robin Lehner, and so on) as well as some players signed to rookie tryout contracts, and maybe even some shoo-ins for the big club (possibly Brian Lee and Brian Elliott, although I doubt it).

I won't be able to see any of the games, unfortunately, but they're usually a good time. If anyone's heading to some of the games, let me know or post a FanPost with your thoughts on who impresses you the most, and your overall thoughts on the teams who'll be competing.