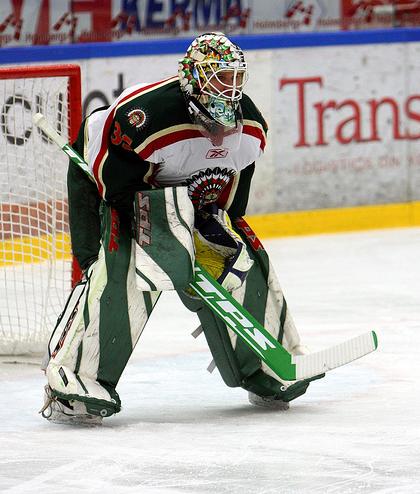 Robin Lehner was the second of two Ottawa Senators' 2009 second-round draft picks, selected 46 overall from the Frolunda Indians junior squad out of Sweden--the same organization Erik Karlsson and Daniel Alfredsson were drafted out of in their respective draft years. He was the second goaltender drafted overall, and a couple of days later was drafted ninth overall by the Sault Ste. Marie Greyhounds in the OHL import draft.

Lehner is the first Senators' goaltending draft pick since 2006, and is likely fifth of the Ottawa Senators' goaltending depth chart (behind Pascal Leclaire, Brian Elliott, Mike Brodeur, and Mitch O'Keefe). If early-development comparisons to Henrik Lundqvist bear any truth, however, Lehner could very well be suiting up for the Senators' NHL squad within a few seasons.

In an interview exclusive to Silver Seven, Lehner talks about his goaltending style, his plans for his hockey career, his thoughts about being drafted by Ottawa, and the good times he had at the Senators' 2009 rookie camp.

Silver Seven: What were you doing when you found out the Senators had drafted you? What were your initial reactions? Were you drafted higher or lower than you expected?

Robin Lehner: I was very happy to get picked by Ottawa and even happier now when I was there. It's a great organization and they all are very good at what they do and they helped me very much at the camp. I was happy to get picked in the 2nd round, and I didn't think I would go before that.

RL: I was second goalie in the draft and that gives me much motivation to keep going and practise hard. I don't feel any pressure right now, I'm just happy to be in the position I am in right now.

S7S: You've received comparisons to Henrik Lundqvist in your size and abilities, which must be high praise in Sweden. And you've also learned the trade from the same coach as him, your father. Do you think that's a fair comparison? How similar are you and Lundqvist?

RL: I'm pretty similar to Lundqvist; he is a good goalie that I've learned a lot from. My dad has given me all the tools of being a good goalie here in Sweden and now it's up to me to go forward.

S7S: I've heard you may be playing in North America next season, and you'll be at the Senators' development camp in early July. Any idea where you might be playing in 2009-2010?

RL: I'm playing for the Soo [Sault Ste. Marie Greyhounds] next seson and I'm looking forward to meeting them and playing for them. Hopefully we will have a good season next year.

S7S: You're a pretty big goaltender, and you were among the strongest prospects at the draft combine. I assume that you're pretty tough in the crease; do Senators fans have another Ray Emery on their hands, or are you usually pretty calm in the nets?

RL: If somebody comes to me and wants to fight... No problems they can try! But usually I'm not the one that comes to you, my job is to stop the puck.

S7S: Are you excited to be playing alongside other former Frolunda players Erik Karlsson and Daniel Alfredsson with the Senators? How well do you know those two?

RL: I'm happy Erik is there! He is a great guy and he helps me a lot. Alfredsson is a great player; don't know him, though, but would like to.

S7S: Some people have said your favourite team is (or used to be) the Red Wings. How closely do you follow the Senators? How do you feel about joining the organization?

RL: I don't have a favourite team in NHL. I am a fan of the NHL and I like most teams. I liked Ottawa much growing up.