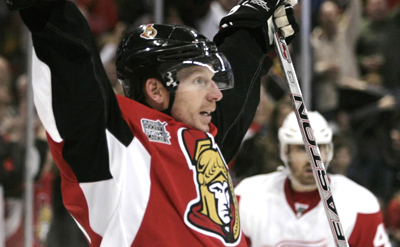 As was correctly announced over at Sens TOWN, Daniel Alfredsson has become the National Hockey League's longest-serving active captain. It was made official when Joe Sakic announced his retirement recently, and Saku Koivu left the Montreal Canadiens and signed with the Anaheim Ducks: Alfredsson, who has been captain since the 1999-2000 season, has now led his team longer than any other.

The memories which Alfredsson has given Ottawa Senators fans are many, and it's fitting that he is honoured as one of the league's premiere leaders. He was the first Ottawa Senator to win a major NHL award when he won the Calder Trophy as a rookie, was the biggest part of getting the organization through the Alexei Yashin nightmare, stayed with the team through financial and ownership problems, and now leads the Senators in every offensive category: regular season goals (355), regular season assists (566), regular season points (921), playoff goals (43), playoff assists (37), and playoff points (80).

There are any number of great memories that Senators fans have, but listed below are the top-ten, according to Silver Seven. Feel free to add comments, or your own memories, in the comments section.

With an eventual 7-1 victory well in hand, Alfredsson got the ire of  Toronto Maple Leafs fans by mocking Sundin, who was suspended from the game for throwing a broken stick into the stands--by pretending to throw his own broken stick into the crowd. The Battle of Ontario was well-established, but this move helped cement Alfie as a villain in Toronto and a hero in Ottawa.

Read the rest of the list below the fold...

Daniel Alfredsson has a four-point night, including a hat trick and the game-winning goal, as the Senators set a franchise record by scoring eleven goals in a single game.

8. February 21, 2009: Alfredsson returns from a broken jaw after missing only one game

The 2008-09 season was one to forget for Senators fans, but it still had its moments. One of the most memorable was when Daniel Alfredsson, after breaking his jaw on Feb. 17, returned after only three days off--missing only one game--to suit up for the Senators. He returned with a jaw-mask protecting the hairline fracture, but wouldn't let the injury keep him out of the lineup--despite the fact that most pundits had thrown in the towel on the Senators' season, and they were miles out of the playoff race. He had, earlier in the season, missed only three games after having arthroscopic knee surgery, both demonstrations of his commitment to the Senators franchise.

7. May 10, 2002: Alfredsson smokes Darcy Tucker to turn the puck over and scores the game-winning goal on the same play

It was another war in the Battle of Ontario, and the Senators were looking to go up 3-2 in the series. With the game tied 2-2 late in the third period and Tucker controlling the puck in the Leafs end, Alfredsson smoked the long-hated Leaf to cause a turnover, which resulted in Alfredsson himself scoring the game-winning goal. It was yet another case in the file Leafs fans hold against the Sens' captain, but Ottawa fans saw it as a testament to his neverending gumption.

6. 2003-04 NHL season: Alfredsson agrees to defer salary to allow for the acquisition of Peter Bondra

The 2003-04 Ottawa Senators were a good team, but fans were sick of seeing their good team do nothing at the trade deadline to boost their chances in the off-season. But with the team mired in an ugly bankruptcy proceeding, it was going to be difficult for an acquisition of any significance. With that in mind, Alfredsson was the first Senator to defer some of his salary to enable the acquisitions, and as a result the Senators were able to acquire Bondra, Greg de Vries, and Todd Simpson at the trade deadline. Although the deals did nothing, in the end, to help the Senators as they lost in the first round, the move proved Alfredsson's commitment to winning--and to winning with the Senators.

Coming off the lockout, Senators fans were desperate for NHL hockey, and were ecstatic to have their team back on the ice for a meaningful game--and against the hated Maple Leafs, no less. With the Senators down 1-0 after two periods, head coach (at the time) Bryan Murray decided to load up the Senators top line: He bumped Brandon Bochenski off the wing and moved Alfredsson up with Jason Spezza and Dany Heatley, creating what would become the legendary CASH Line. With his new linemates, Alfredsson tied the game twice in the third period, first even at one and then even at two, and took the team through overtime and into the shootout. On the first shot of the first shootout in NHL history, Alfredsson made it count, beating Belfour to score what would be the shootout winner.

Despite being drafted 133 overall in the 1994 NHL Entry Draft and coming into the league with little fanfare, Alfredsson went on to lead the NHL in rookie scoring with 26G and 35A in 82GP. He was named to the 1996 NHL All-Star Team, the 1996 All-Rookie Team, and won the Calder Memorial Trophy that season--ahead of some highly touted rookies including Saku Koivu, Ed Jovanovski, and Petr Sykora. It was the first NHL award given to an Ottawa Senator.

The season that had started so promisingly was coming apart at the seams, and the Senators had lost five of their last six games. That didn't slow Alfredsson down, though, as he scored seven points in the Senators 8-4 victory of the Tampa Bay Lightning. Featured in the record-setting night were three goals--one even strength, one powerplay, and one short-handed, plus four assists, and his record still stands.

2. June 2, 2007: Alfredsson scores to bring the Sens back into what would be their first (and only, to date) Stanley Cup Final game victory

After losing the two series-opening games in Anaheim, the Senators were back in Ottawa but behind the eight-ball, down 3-2 mid-way through the game. It wasn't looking good, but the people in the stands had been raucous all night, and were not about to stop. At around the 16 minute mark, with the Senators on the powerplay, Alfredsson stepped onto the ice, and a chant of 'ALFIE! ALFIE! ALFIE!' rose in the stands. The team works the puck into the zone and Wade Redden throws the puck on net; it deflects of Alfredsson, and the Senators go on to win the game.

1. May 19, 2007: Alfredsson scores the overtime game- and series-winner against Buffalo in the Eastern Conference Finals

The first and only time the Ottawa Senators made it into the Stanley Cup Finals, and the goal to get them there--naturally--came off the stick of Daniel Alfredsson. It didn't matter that the shot was deflected by defender Brian Campbell, or that so many US fans couldn't see it because NBC had cut to coverage of the Preakness as overtime began; it was sweet revenge to oust the same team that had ousted the Senators the year before, particularly for the fact that Alfie was on the ice checking, who scored the game-winner that season. The video speaks for itself: