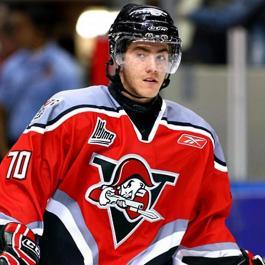 With the Ottawa Senators' fifth round pick, they have selected left winger Mike Hoffman from Drummondville Voltigeurs of the QMJHL. Hoffman was eligible for the draft last year, but went through without being picked.

However, that could be because this year was his breakout season. Hoffman was fifth in the QMJHL in points this year, and second in goals scored. He had 52 goals and 42 assists for a total 94 points in 62 games this year for Drummondville. He also notched 21 goals and 34 points in just 19 playoff games.

And just so everyone is clear, this is not the same Mike Hoffman that is a fourth-line brawler with the Atlanta Thrashers.