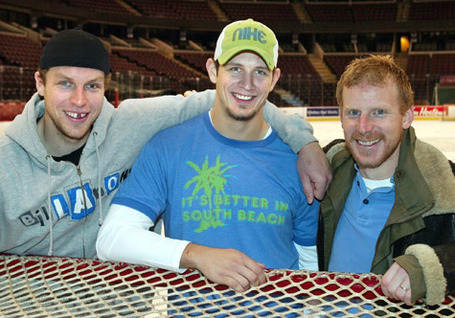 Rumors of Heatley's demise have been greatly exaggerated.

In a few short days, Dany Heatley may no longer be an Ottawa Senator. And when that day comes, fans will be either A) delighted with what we get in return, or B) upset that we lost a 50 goal scorer for a few 3rd liners. Whether fans are happy about the result or not, there probably will be very few saying anything positive about Dany Heatley.

In fact, in the past few weeks, I have heard and read nothing but negative comments about Heatley, whether it is from hockey fans, hockey journalists, or NHL general managers. And so, since nobody else is up to the task, I'm going to look at five of the most common insults hurled Heatley's way and shed some positive light on the subjects, because it's awful tiring reading the same few criticisms every day.

After the jump, the 5 current myths surrounding Dany Heatley.

1. Dany Heatley is a soft player

I'm not sure where rumors of Heatley's soft play have come from, but they are completely unwarranted. Out of the top 3 Senators players, he had the most hits with 87. By comparison, Daniel Alfredsson had 57, while Jason Spezza had an embarrassing 26. Let's compare him to other elite goal scorers. "Jumbo" Joe Thornton? 81 hits. Malkin and Crosby? 80 hits each. Zach Parise? 65 hits. Jeff Carter? 54. Ilya Kovalchuk? 43. Now, I know that "hits" stats are a little hard to trust, considering what may or may not count as a hit, but it simply shows that Heatley is on the high end of hits for a goal scorer (Alex Ovechkin excluded, but that guy's probably an android of some sort).

Sure, he's not a bruiser or the power forward that his size suggests, but he's far from soft. Besides, let's face it - a soft player would not be missing that many teeth.

2. Dany Heatley made his trade request public, and gave a  list of where to go, which is in poor taste

As to the trade request being made public, it would be a knock against Dany if it was Heatley's idea. I'm not sure if that is confirmed, though. Though I might be mistaken, I believe his agents were the ones who publicly requested the trade. Does that excuse it? No, not quite. But it might mean that Dany shouldn't shoulder the entire blame, if any for it going public.

And for giving a list of where he'd like to go, well, Heatley has a right to do it, and that's part of the negotiation. It's also something that Dany probably wants to do so he doesn't end up miserable in a city he hates, and have to go through this whole process again. Let's face it, if you had the option of choosing where your next job would be, or just having your boss send you off somewhere, which would you choose?

Yes, his stats have declined the past few years, this is true. But this should be expected when his team went from 1st in the Eastern Conference one year, to 4th the next, then to 8th, then finally to 11th. Also, the defensive system that was in place most of the season under Craig Hartsburg significantly reduced the stats on pretty much every player on the roster. Defensive hockey does not make for 100 point seasons. Has his performance itself declined? I wouldn't say so. Sure, a bit of effort was lacking, but that was missing on the rest of the team as well.

4. Dany Heatley is not worth $7.5 million in cap space, and that contract is too long!

Let's face it: no professional athlete is worth the absurd amounts of money we toss at them.

But if terms of value, Dany's contract is not out of line by NHL standards. True, he'll be the seventh highest cap hit next season, but he still costs less than both Vincent Lecavalier and Eric Staal, and is also on a shorter deal than either of them. He also earns less than Brad Richards. For a guy who scored 180 goals in the last 4 seasons, he's making what you would expect a player of his caliber to earn, and it will almost certainly be lower than what a player of his stature would earn as a free agent. Also, the length of the contract should not be too large of a concern, considering he will still only be 33 years old when it's over - hardly an age where you can expect significant depreciation in skill (unlike the aforementioned Lecavalier, who will be 40 when his contract ends).

This seems to be the most popular argument as to why teams should not trade for Heatley. However, there is little evidence (aside from his trade request) that he is a so-called bad character guy.

Heatley was named Alternate Captain of the Ottawa Senators at the start of this year because of his character. And while that is now seen as the act of the GM trying to make his star player feel good, remember this: he was also Alternate Captain for Team Canada this year at the World Hockey Championships. Considering he was surrounded by talent, there must have been a reason for that. It's also worth noting that he was never involved in rumors of being a locker-room cancer the way some of our previous players were, and was well-liked by the Ottawa Senators dressing room, as shown from statements by Chris Neil and Mike Fisher. Even after the trade request was announced, Neil stated: "He’s a guy who was well liked in the dressing room, a guy who is going to score 40 to 50 goals for you (each season)." Fisher also praised Heatley's personality, saying "Heater has done so much good here. He's a good guy ... he was a great teammate."

Dany Heatley has had his name dragged through the mud for weeks now. Some of it might be deserved, but most of it is not. Sure, it hates to feel unwanted, but let's not lie to ourselves: we are losing a huge part of this franchise. The guy is a tremendous talent, and it's sad to see how quickly everyone turned on him. Although perhaps Heatley doesn't mind: it simply helps to confirm that Ottawa is not the place he wants to be.