Share All sharing options for: Murray Finally Speaks About Heatley 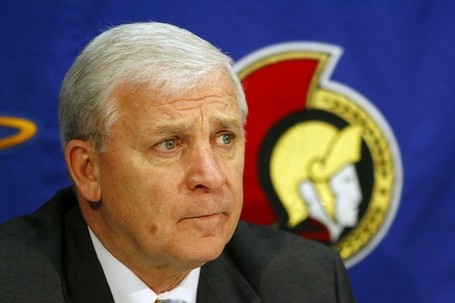 (EDIT: Story has been updated with a few additional quotes that have found their way online, and our reactions)

It took a full week, but Senators GM Bryan Murray is finally speaking out about the Dany Heatley trade situation. Prior to today, Murray had only stated that "at this point in time, he's a Senator." And while Murray is in no way letting fans know what is going to happen or what talks with other teams have produced so far, one can glean many positives from his statements:

1. Murray has spoken with other teams about Heatley

"I have had some conversation with several teams."

Of course, this is to be expected, but it's nice to see it actually confirmed.

2. A trade by draft day is ideal

"I don't really have a timetable but I have encouraged anybody that is really interested to try to make the contact before the draft and we will get something done by that time I hope."

Though Murray is not setting a timetable for Heatley's trade, he does hope to have something done by draft day. The days leading up to the draft tend to find GMs stressed out, tired, and looking to make a big splash, and Murray obviously hopes to capitalize on that atmosphere.

3. Murray wants something in return for Heatley

"I'm just not going to let him just walk away for nothing as you know. Whether we get the ideal trade or not that is one thing but I have to get something good for this organization coming back."

""We’re looking at a variety of avenues ... if it’s a draft pick or a flip of a pick and a couple of players coming back… we would consider anything."

Phew, there goes the worry that Heatley would garner zero in return. (So much for Yashin, Brendl, and a 3rd)

4. Regardless of a list of preferred destinations, Murray is still the boss

"If he doesn't want to be in Ottawa and there is team that offers me a deal that I think is a better deal obviously I have to put some pressure on them to accept that or he may end up playing back here."

Although Heatley has given the GM a list of ideal trading locations, Murray insists that he will not bow to Heatley's commands. Though people think that Murray has little leverage here, think again. 2010 is an Olympic year, and it's pretty obvious that Dany loves representing his country. He'll want to be playing for a team that offers him a positive atmosphere and a spotlight, not awkward dressing room situations and an arena filled with boos every night until a trade is worked out. If Murray gets a better offer from a team that is not on Heatley's list, he will do everything within his power to pressure Heatley to take the trade that is better for the Sens, not for Heatley.

This also shows that Murray has not ruled out the idea of Heatley playing here in 2009-2010, something most fans seem to have done.

More after the jump...

5. Murray, though disappointed, does not hate Heatley the way the Ottawa Citizen hates Heatley

"I really like Dany Heatley a lot. I think he’s a great player and a good guy."

"Dany never said anything to me but complimentary things about Ottawa. Never, at one time, do I remember him saying he didn’t like the attention and that he didn’t like the city. The fact that he signed a long-term deal (early in the 2007-08 season) indicated to me and everyone around him that this is where he wanted to be."

A bit of damage control on Murray's part. The ridiculous Ottawa media has decided to tarnish Heatley's name without any information as to what is going on, so Murray has to try and fix Dany's reputation so that we can find a decent suitor.

"What (trading Heatley) might do is balance our dollars a little bit. If the cap is going to go down in the future, to have maybe two players (earning) that amount of money rather than one might help us. It might give us a little more depth than we had."

This is the right thing to think about, and it's what I've been saying since the news first leaked out. We don't need to replace Heatley with another 7.5 million dollar player. The team needs to spread out its depth to several different lines to have a more balanced attack.

7. No offers yet involving a top ten pick

There is no quote from Murray on this yet, but the Senators' official website states it as fact. This means that all of those rumors about the Avalanche's 3rd overall, the Kings' 5th overall, and the Oilers' 10th overall picks are almost certainly false (after all, if they were true, Murray would want to get that information out there to create a bidding war).

Murray's long silence prior to today's press conference was a bit unsettling, but he has chosen his words carefully, and its hard to fault what he has said here (aside from the website letting slide that no top ten picks were offered). Let's just hope he can keep saying all of the right things in negotiations with the other teams.