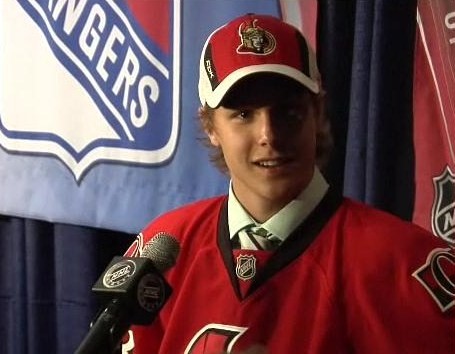 The Ottawa Senators announced today that they signed 2008 first-round draft choice defenceman Erik Karlsson to an entry level contract. Details of the contract, including term, were not immediately available.

Karlsson has had a pretty good year, beginning with his unexpectedly high first-round selection in the 2008 NHL Entry Draft in Ottawa (15th overall, even though he was ranked later in the first round), his coming out party in Ottawa at the 2009 World Junior Hockey Championships (two goals and seven assists in six games, and a selection as the tournament's best defenceman), a good season in the Swedish Elite League with five goals and five assists in 45 games, plus three more points (1G, 2A) in 11 playoff games.

Although he's still young, Karlsson is expected to compete for a spot on the Senators d-corps, possibly alongside Filip Kuba on the first pairing but more likely on a third pairing with one of Alex Picard, Jason Smith, Chris Campoli, Christoph Schubert, and possibly Brendan Bell. If I were a betting fan, though, I'd say there is a good chance Karlsson will play most of the season in Binghamton, getting used to the North American style and an 80+ game schedule.

Wherever Karlsson plays this season, it will be exciting to see a premiere prospect back in the Sens system.